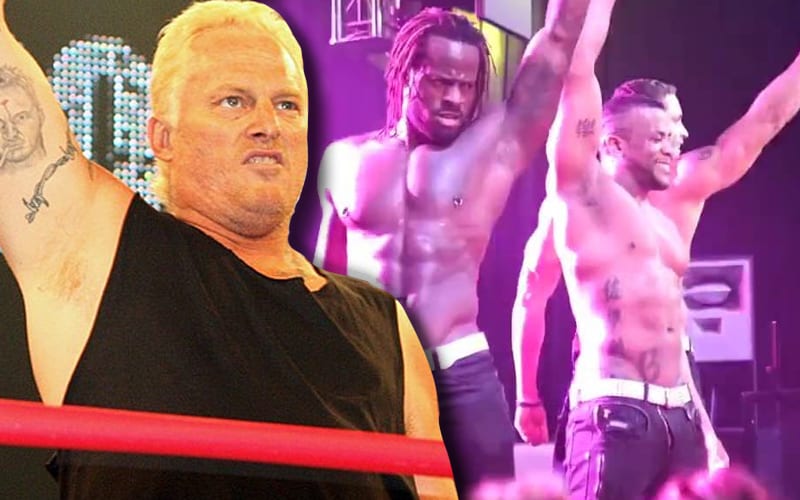 ECW welcomed wrestlers from various backgrounds. Most fans of the extreme pro wrestling company might not realize that Sandman had a much different career prior to entering Paul Heyman’s company.

During a recent episode of That Was Extreme, The Blue Meanie revealed how Sandman was a Chippendales dancer prior to entering into the world of extreme pro wrestling. He had a different look from the style that ECW fans came to know. Bar Rescue’s Jon Taffer was also involved in this very interesting story from pro wrestling history.

“We all know Bar Rescue, right? With Jon Taffer… well he owned a club. He’s infamous for opening night clubs all around the world. That’s why he got the Bar Rescue gig. He had a club in Philly called Pulsations and if you’ve seen Rocky III with the robot and all that stuff, that was Jon Taffer’s robot. Jon Taffer had that robot built for his nightclub Pulsations, which they worked into the movie Rocky.”

“Coming back to Sandman, they would have a night at Pulsations where they would have Chippendale dancers and Sandman danced for Chippendales pre-wrestling career. He had long blonde hair. He looked like Stunning Steve Austin when Stunning Steve Austin had long blonde hair. I guess he was young and in shape and did some Chippendale dance at Pulsations for Jon Taffer. Pulsations was famous in the Philadelphia area for having this UFO that would come over the nightclub and one night a felon killed somebody and they took the dead person out and continued to party. Mid to late 80s Philadelphia nightclub scene, John Taffer owns Pulsations, which essentially goes on to hire James Fullington, aka The Sandman, as a Chippendales dancer.”

“I’ve asked Hak, do you still have photos and he’s like ‘ah, my mom’s probably got them somewhere’ or ‘my mom probably threw them out.’”

Their stories did not end at a bar with Sandman as a Chippendales dancer. They eventually found that there were much more dangerous places to party in Philly, specifically in a pro wrestling ring. It also makes us wonder how different things could have been for Sandman if Vince McMahon was told about his history with Chippendales during his short run 2005-2007 with WWE.