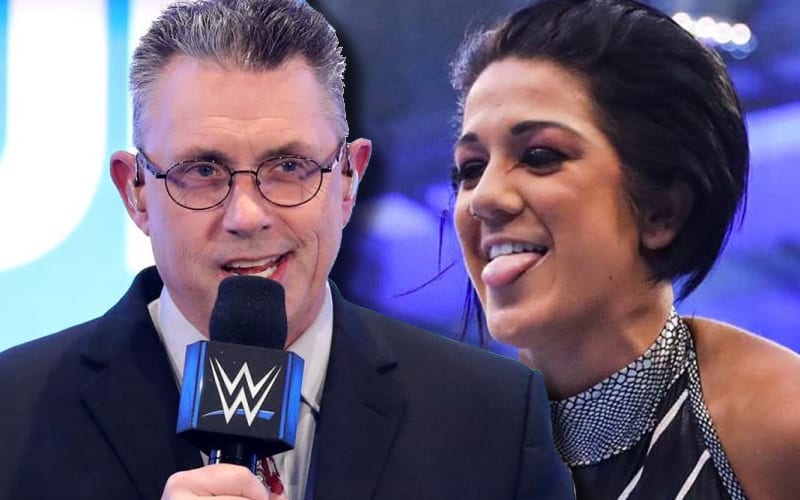 Bayley will sometimes shave a word in the back of her head. This is something she could never do prior to chopping her hair off when turning heel. Her hair had a very special message in it for the Royal Rumble, but Bayley was unable to deliver it as she intended.

During After The Bell, Corey Graves revealed that Bayley shaved “COLE” in the back of her head for the Royal Rumble. This was done to take a light-hearted shot at the longtime WWE announcer. Graves thought it was a great idea and he encouraged Bayley to do it.

Bayley shaved “COLE” in the back of her head, and then sometime later, Graves was reminded that Michael Cole wasn’t even calling the Women’s Royal Rumble match. All of that was for nothing because Bayley wasn’t even able show him during the match. Needless to say, Bayley wasn’t incredibly happy about it.

“Bayley thought it would be hilarious to rib Cole by putting his name in the back of her hair, much like Ravishing Rick Rude used to put his opponents face on his tights. I think that was the mentality. So, we were in the barbershop that is at the ThunderDome earlier in the day and I’m getting my hair lined up and my beard taken care of. Bayley walked in and she started asking what she should put in the back of her hair. It’s been a thing she’s been doing recently. She actually suggested the name Cole.”

“I said, ‘Yea, I think it’s a great idea. I think it’s going to be really funny. I think it’s going to be downright hysterical. I can’t wait to see his face when he realizes what you did.’ About three hours later, I got a text from Cole and it’s a photo of him and Bayley and a reminder that Cole was not calling the women’s Royal Rumble match. I did know that but I didn’t realize it at the time. It didn’t register. We had a full-blown conversation about how hilarious it would be and even I forgot that Cole was not going to be ringside, so I encouraged Bayley to shave Michael Cole’s name into the back of her head, basically for no one’s entertainment but my own. Bayley was none too thrilled with that.”

Michael Cole likely got a kick out of Bayley’s gesture, but they weren’t able to let it play out on camera. Maybe the next time Bayley wants to deliver a message with the back of her head she’ll make 100% that her target will be able to see it first. Thankfully, her hair will grow back.