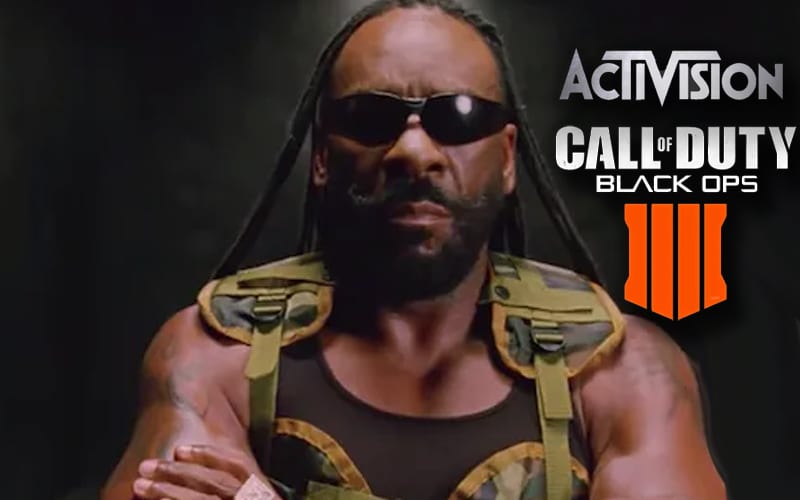 Booker T alleged that a character used in Call of Duty: Black Ops 4 looked a lot like him. This character looked like his GI Bro character, and now he’s going to let the court decide matters.

According to PW Insider, Booker T’s lawsuit against Activision over the Call of Duty gimmick infringement is going to court. Booker is set for a “courtroom showdown” over this lawsuit first filed in February 2019.

Booker T is looking for a trial with a jury and an award to be determined at that time. Jury selection will start on April 19th.

The lawsuit is over a character named “David ‘Prophet’ Wilkes” who looked a lot like GI Bro, Booker T’s character when he first broke into the pro wrestling business. He has also taken on the GI Bro look in recent memory, including with Bad Bunny.

That character from the 1990’s is Booker T’s look and he’s filing a lawsuit against Activision over it. He alleges that Activision and other creators of the character based the Prophet character off of him and GI Bro.

Booker T has a lot of evidence that the character is his. He also put out two comic books with the GI Bro character in 2015. He owns the copyright to GI Bro as well.

In the nine-page filing, Booker T made it very clear that GI Bro is his property and he alleges that Activision ripped it off.

It is said that his character was used without permission and Activision continued using the Prophet character after they were made aware that it was infringing on Booker T’s copyright. The lawsuit also claims that Activision has made over $1 billion off the game since its release.