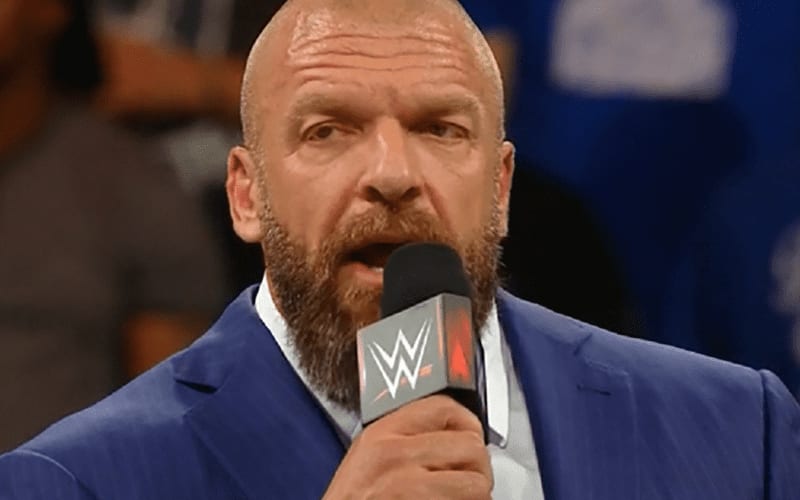 Drew McIntyre was set to have a WWE Title match against Randy Orton on RAW, but that match didn’t happen. The Scottish Warrior tested positive for COVID-19, and a quarantine was needed. The show still needed to go on, and Triple H was available.

While speaking to The Michael Kay show, Triple H discussed replacing the WWE Champion on RAW. This was not a spot that Triple H thought he would be needed in, but he’s always around in case of an emergency.

“I said it a few weeks earlier ironically, and not thinking it was going to happen so quickly; but I said I’m like that little box on the wall that says ‘use in case of emergency: break glass.’ There’s a little hammer there, you smack it, pull the handle, Triple H pops out.”

“To be honest, I got the call the night before and was like, ‘Hey, we’re gonna write you in the show tomorrow. That was it. It is not the same. As a performer, my hat is off to all the men and women right now that are doing this week in, week out. That did it all this time during COVID and the pandemic and they did it in front of no one. They did it in front of few, did it in front of video walls with fans cheering and booing. It is not the same. It is difficult when you have geared your whole life and your whole career to get that reaction and work toward it and now you have to work towards the reaction that you believe you would get… but it’s just not the same.”

Triple H found out that he was needed on the night before RAW. It’s a good thing he was around, because the company needed a big marquee match to counterprogram the college football championship game.

The ending of that match didn’t change from the original plan. Alexa Bliss showed up and threw a fireball in The Viper’s face just as she was supposed to. They just went through a different path getting to that destination.