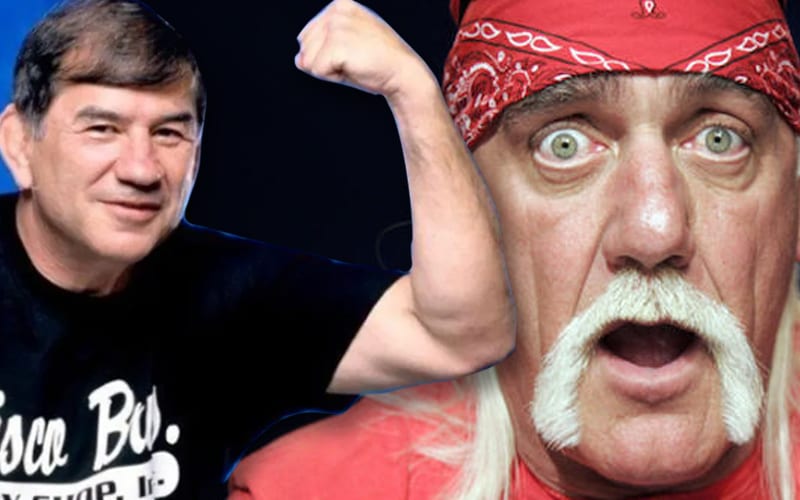 Hulk Hogan is a polarizing individual in pro wrestling. Gerald Brisco’s son Wes had a very interesting experience with The Hulkster. He hit the WWE Hall of Famer square in the crotch.

While speaking to VOC Nation’s Brisco And Big Ace Show, Gerald Brisco revealed a story about his son Wes back when he was much younger. He took a young Wes Brisco to a WWE event, and his meeting Hulk Hogan did not go according to plan.

“One day we heard a bunch of motorcycles coming down our driveway. We looked out the window and there was Hulk Hogan and Brutus Beefcake… (After spending some time out back by the lake) we’re walking back toward the house and (Hulk) looked down at Wes and said, ‘Hey Wes, do you like wrestling?’ Wes said, ‘Oh yeah I like wrestling, I can throw a good punch too.’ … So he reared back – Hogan’s [tall] and Wes is [short] – he reared back and he hits Hogan and hits him right smack dab in the damn crotch. He knocked the breath out of Terry.”

There are probably a lot of people who would love to punch Hulk Hogan in the crotch, and Wes Brisco got a chance to live out that experience. It might not have been on purpose at the time, but it certainly caught The Hulkster by surprise.

Gerald Brisco was just recently released from WWE after over 35 years with the company. Vince McMahon personally called him to let Brisco know that his services were no longer needed. Hulk Hogan last showed up at Legends Night during WWE RAW’s first episode of 2021.