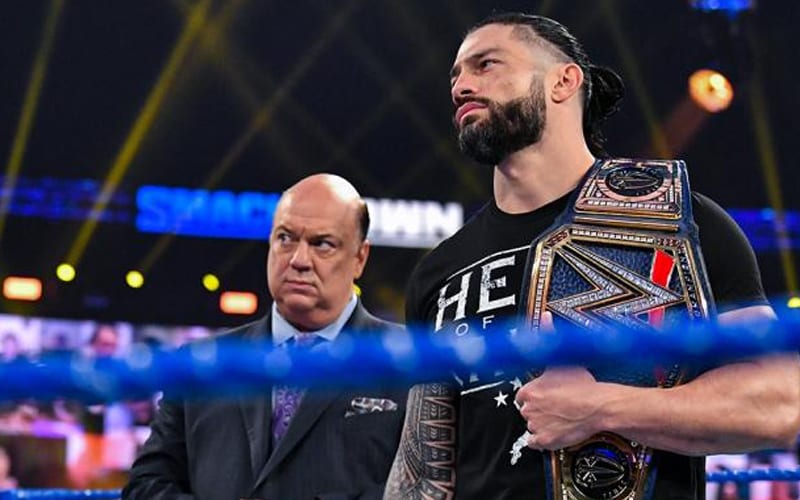 Roman Reigns was gearing up to face Goldberg at WrestleMania 36, but that match didn’t happen. Months of quarantine for The Big Dog followed and he eventually returned as the Tribal Chief. Now he is involved with Paul Heyman, and the duo have considerable input in his creative direction in WWE.

Reigns just recently nixed a main roster call-up from NXT. He agreed that it didn’t make sense for Damian Priest to debut as Kevin Owens’ best friend. Reigns’ creative input is unlike any other WWE Superstar, and Paul Heyman deserves the credit.

Ringside News asked around about Reigns changing up plans. We were told that Paul Heyman working with Reigns has brought him to that level.

One source backstage told us “the only reason he’s so far ahead of everyone else is because, much like Heyman was with Brock Lesnar or Heyman was with Ronda Rousey, the best creative person in the business is working with him.”

No other pushes in WWE compare to Roman Reigns’ current creative direction, and there is a reason for that. Paul Heyman has created a gripping storyline for the Tribal Chief.

It was also explained to us that Paul Heyman took Roman Reigns, a main event Superstar, who was never able to connect with the WWE Universe. “Now Reigns is the biggest star in the business within four months. They SHOULD change the creative every week.”

As we previously reported, creative plans for SmackDown this week seem to be going well. They had a big re-write last night, but they are mostly sticking to that plan. Roman Reigns and Paul Heyman will always speak up if they need to.