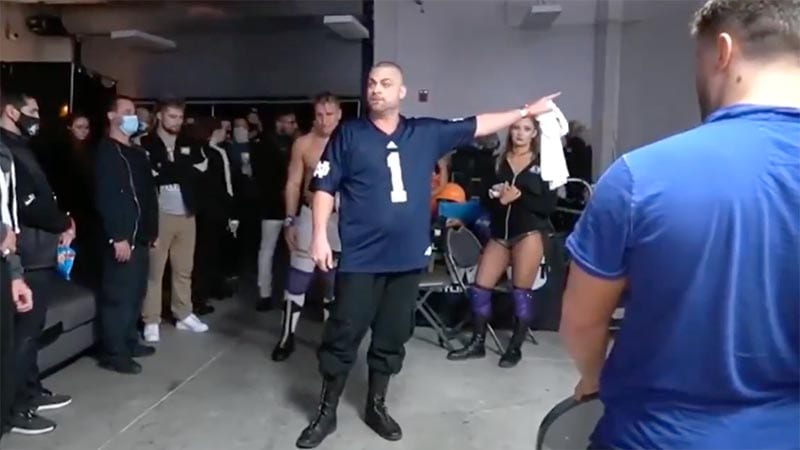 AEW held a special edition of Dynamite to close out 2020. It was a tribute show which honored the life of Brodie Lee. It was an emotional night for the entire pro wrestling world, as everyone gathered to celebrate the life of a man they held dear.

After the show ended, Eddie Kingston delivered a touching speech to the AEW locker room.

While speaking to Renee Paquette on her Oral Sessions podcast, Eddie Kingston opened up about his passionate speech which was addressed to the AEW roster. Kingston revealed that his friend Homicide still makes fun of him for the speech.

Kingston added that he had an overwhelming feeling of energy once the Brodie Lee tribute show ended. Kingston felt the need to make others understand why he felt that energy.

“Homicide makes fun of me now, because he goes, ‘Oh, see you’re the locker room leader now’. I’m like, ‘Leave me alone’. He’ll randomly send me like a picture of something saying boss on it and I’m like, come on. What was weird was I just had this overwhelming feeling of energy after the show was over. I was kind of like, No, no, no and I feel like I need people to understand why I’m getting this energy. And I just started yelling, because I was like, can we do this every week does it take one of our fallen brothers, and I considered Brodie a brother why does it take him to pass away for us to be this emotional in the ring. And bring it out to the people so that people can feel us, you know? And I’m going on and on. And I’m like, oh, man, this is really embarrassing. People are looking at me What the f*** is going on? And I see the camera and you can actually see me see the camera. Look at it, and I go, okay, we gotta carry it. Alright, carry it, and I run away as fast as I can. It’s not about that. I get why they put it up. And that’s cool. I’ve done a lot of bad in my past that I don’t think like me doing this stuff now is oh look at me. I’m a good boy. I’m a good guy. I could give a f*** less. As long as my family knows I’m good. As long as you know the mean, people who I care about know, hey, Eddie has problems, but he’s a good person. That’s all I care about. I don’t care about the masses, or the internet community knowing you know what I mean, I don’t care.”

Eddie Kingston squared off against PAC on this week’s episode of AEW Dynamite, where he was unable to win the match.