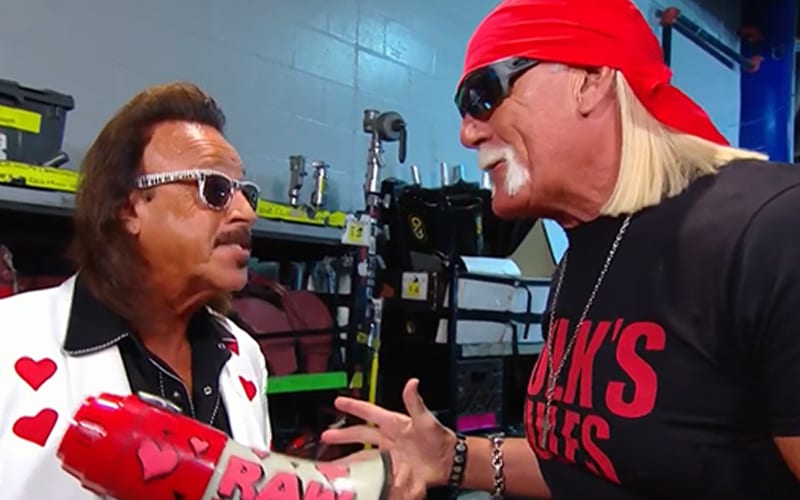 Hulk Hogan and Jimmy Hart have appeared at tons of functions and events together. They were recently seen at Legends Night as Hart acted alongside The Hulkster in a backstage segment. That friendship has lasted decades, and it is thanks to Jerry Lawler.

While speaking to Battleground Podcast, Hart explained how his longtime friendship with Hulk Hogan started. It began in Memphis while Hart came in to manage heels because he was and still is a heat magnet when he turns the megaphone up.

“Hulk and I met many years ago. We started in Memphis wrestling with Jerry Lawler down there. I was managing all the bad guys back then, and Hulk came through and he was one of the people I’d managed. We became friends back then and so finally, in 1984 when I left to go to New York, the first thing when I walked in, I saw Hulk there. He goes, ‘I hope you’re coming to manage me.’ I said, ‘Nah, Hulk, I’m sorry. I’m managing all the bad guys.’ What a great run. We’ve been friends for so many years – almost 40 years.”

“So, I had a chance to manage him and Brutus Beefcake and we fought Ted DiBiase and IRS for the belts at WrestleMania 9. It was just a great time being back with him again. I’d had a great run with The Hart Foundation, The Nasty Boys, The Rougeaus, Terry Funk and Dory Funk, and Earthquake and Typhoon. Altogether, I think in New York I had 23 different people that I had managed at one time or another, not counting the Memphis territory. I’ve had a great run. I’ve been blessed, man.”

There are few friendships in pro wrestling that lasted as long as Hulk Hogan and Jimmy Hart. They are still very much involved in one another’s careers. Hulk Hogan might get a “cold” reception from a lot of the younger wrestlers on the WWE roster when he comes back, but he’ll always have a friend in Jimmy Hart.