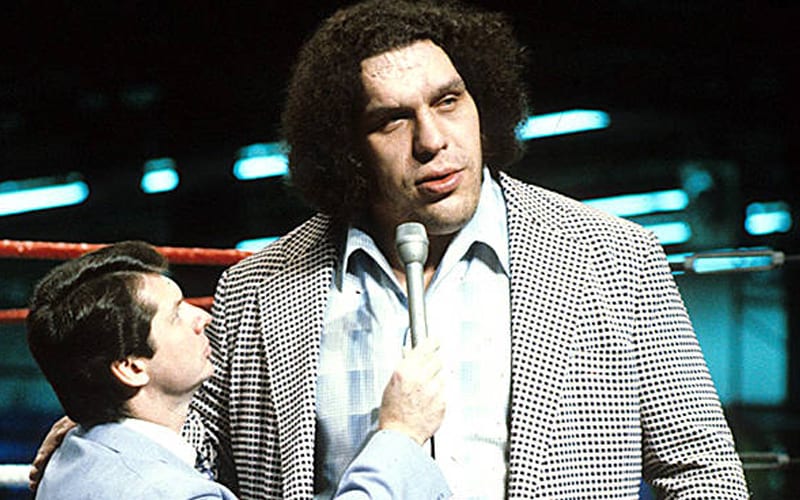 Andre The Giant, a man whose image is still immortalized as one of the most famous faces in pro wrestling history, was the very first inductee into the WWE Hall of Fame in 1993. This was and announcement made nearly two months after his passing. Vince McMahon felt very close to Andre, and he hated how they left things.

During a recent episode of Something To Wrestle With, Bruce Prichard spoke about Andre the Giant and how his passing sped up the process to institute a WWE Hall of Fame, an idea they were previously considering.

At that time, we had been talking about doing a Hall of Fame. It was unfortunate, Andre’s passing, but I think that kind of sped it up because if there was ever anybody that was worthy of being the first inductee into the Hall of Fame, it was Andre The Giant.

Vince McMahon and Andre the Giant didn’t end things on the right terms. This was something that stuck with Vince McMahon. There was regret about how they had a falling out, and that led to McMahon not being able to properly say goodbye.

Vince took it hard. Vince and Andre were the same age and had birthdays that were fairly close together. Vince considered Andre one of his best friends and really hated the falling out that they had. I think there was a little bit of regret that hadn’t been completely rectified and he didn’t have the opportunity to say goodbye to his friend

Vince McMahon featured Andre the Giant for some big moments in WWE’s early days. McMahon revealed during the HBO “Andre the Giant” documentary that he doesn’t “specifically” remember the last time he spoke to Andre the Giant. In the emotional interview, which you can see below, McMahon said he has the ability to forget bad memories. Obviously, losing Andre without getting to mend things still weighs on The Chairman.