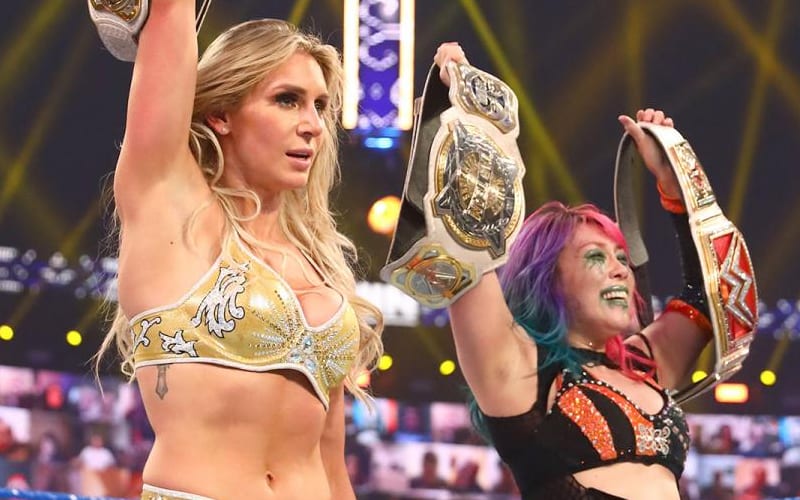 Charlotte Flair and Asuka’s team was a surprise union at TLC that resulted in a tag team title run. Everyone want to know what their team name might be. While on Talking Smack, Charlotte Flair tossed out “Queens of Tomorrow,” and that might stick.

The Queen was also asked if there are any teams that they fear on the WWE roster right now. The simple fact is they have defeated many of them. There are still some exciting possibilities on the SmackDown brand.

“It’s not like [there’s] one particular team we fear the most. But we had the opportunity to be on commentary on Monday Night RAW, and since I’ve been gone and then coming back and seeing the improvement of the women, like Mandy Rose and Dana Brooke…and we’ve beat Nia [Jax] and Shayna [Baszler], they’ve come a long way.”

“Then, coming here tonight, and Asuka and I having been former SmackDown Women’s Champions, we both have a history with Bayley and Sasha Banks. And seeing Bianca [Belair] in the ring and Carmella, it was great. But like, I think we’re going to be a hard team to beat.”

Charlotte Flair’s return to WWE immediately saw her capture the WWE Women’s Tag Team Titles. This is a very interesting spot for her to be in as they go to the Royal Rumble. Asuka’s status as RAW Women’s Champion also makes her “Asuka Two Belts” for now.

We’ll have to see what takes place as WWE rings in a new year, but Asuka and Charlotte Flair are still sitting on top.