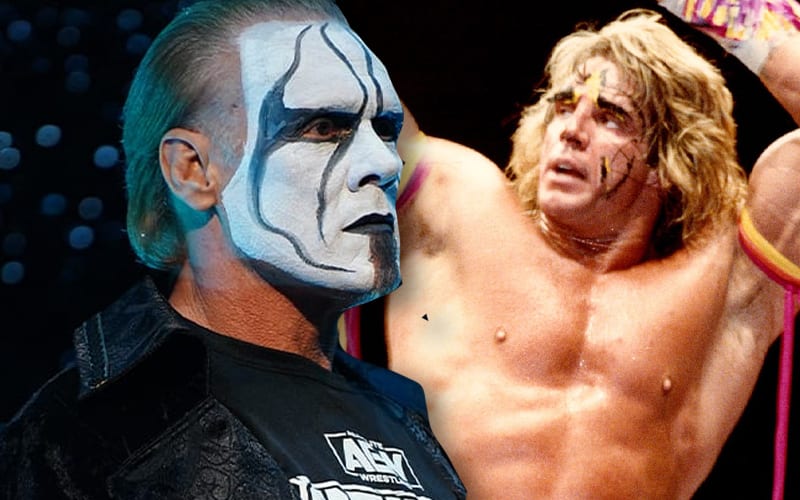 Sting’s Hall of Fame career saw him partner up with many people. He started his career tagging with the Ultimate Warrior in the “Blade Runners,” a team he is not shy about discussing how bad they were.

While speaking to AEW Unrestricted, Sting explained how he ended up in that tag team with Ultimate Warrior. They were from the same area and trained together. They eventually sent out press packets to promoters across the country. Only one man called them, and that was Jerry Jarrett.

There were 4 men in the photo Jarrett was looking at, but he only wanted Sting and the Ultimate Warrior.

“[Ultimate Warrior] and I we went through a training together and we were really trying to figure this thing out. How to take the moves, and how to take the bumps, and learning the psychology and all that and so, we sent out press kits, even to Japan, all over the United States. At the time there were territories all over the United States. At the time we had one person reach out to us of all the ones we sent out — we sent out like 30 of them. Jerry Jarrett was the only one who reached out and said ‘yeah, I want you guys.'”

“Jim was living in my house at in California. He was on one [telephone] line, I was on the other, and Jerry says I want two, the two to the left, which was us. I said ‘well, you’re talking to those two guys.’ He said, ‘well, get in your car and come on out.'”

“We started in Nashville, Tennessee. Thanksgiving Day 1985 was our first match.”

Decades later, Jerry Jarrett’s son Jeff Jarrett offered Sting another opportunity. Double J worked out a deal with Dixie Carter to run a company called TNA. The rest is history, and Vince McMahon wasn’t pleased at all with Sting’s decision to choose TNA over WWE.

When Sting finally ended up in WWE, the company released a special two-pack action figure set. Sting was packaged with his old tag partner the Ultimate Warrior, but there was no mention made to the Blade Runners in that battle pack.