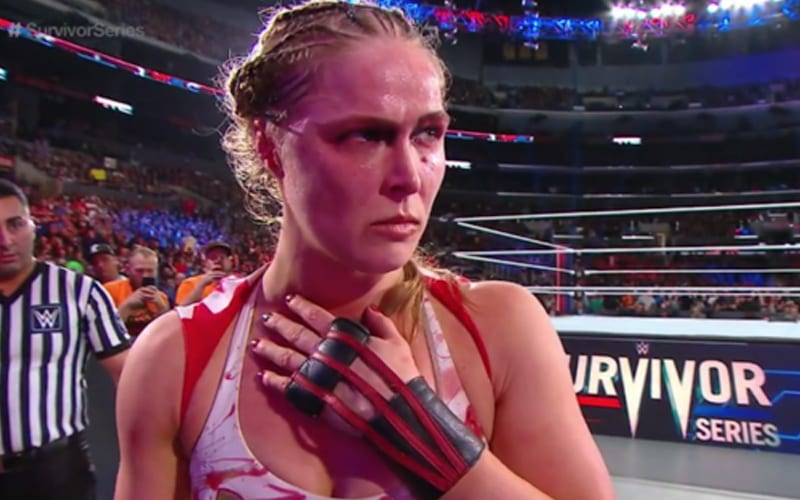 Ronda Rousey is keeping the ring rust off by practicing in the pro wrestling ring. The former RAW Women’s Champion has yet to make a return to WWE. You can never say never, but Rousey has reasons for staying out of active competition.

WWE was able to secure the Baddest Woman On The Planet to a year’s worth of full-time services. She lost her title at WrestleMania 35, and she hasn’t been back.

While speaking to Digital Spy, Ronda Rousey said that the bottom vertebrae in her back is broken in half. That certainly has something to do with why she hasn’t jumped back in the squared circle.

“I love wrestling but I think it was maybe Sarah Rowe (Sarah Logan) who told me this, she wrestles for free but they pay her to travel. The hardest part I think was just not being able to lay down horizontally, you know. Taking a bunch of hard bumps, your back hurts and you just want to lay down.”

“All I wanted to do between shows is lay down with my legs up and traveling you’re just sitting upright all the time and my back would kill me. So the actual act of traveling I do not miss it all, it was the absolute worse.”

“My bottom vertebrae in my back is actually broken in half. So that has something to do with it. But traveling on a broken back is the absolute worst. I love being home on my extra firm Tempur-Pedic mattress every night.”

Ronda Rousey likely wouldn’t be required to do nearly the amount of traveling now. WWE doesn’t have the road schedule they used to even if Rousey returned full-time. The pandemic stopped all of the company’s touring, and it also enlightened them regarding how costly house shows are.

Rousey went through a lot of punishment in WWE. She was fortunate enough to be in a position where she could leave the ring behind her. That doesn’t mean she won’t return, but a broken back could certainly cause her to rethink that decision.