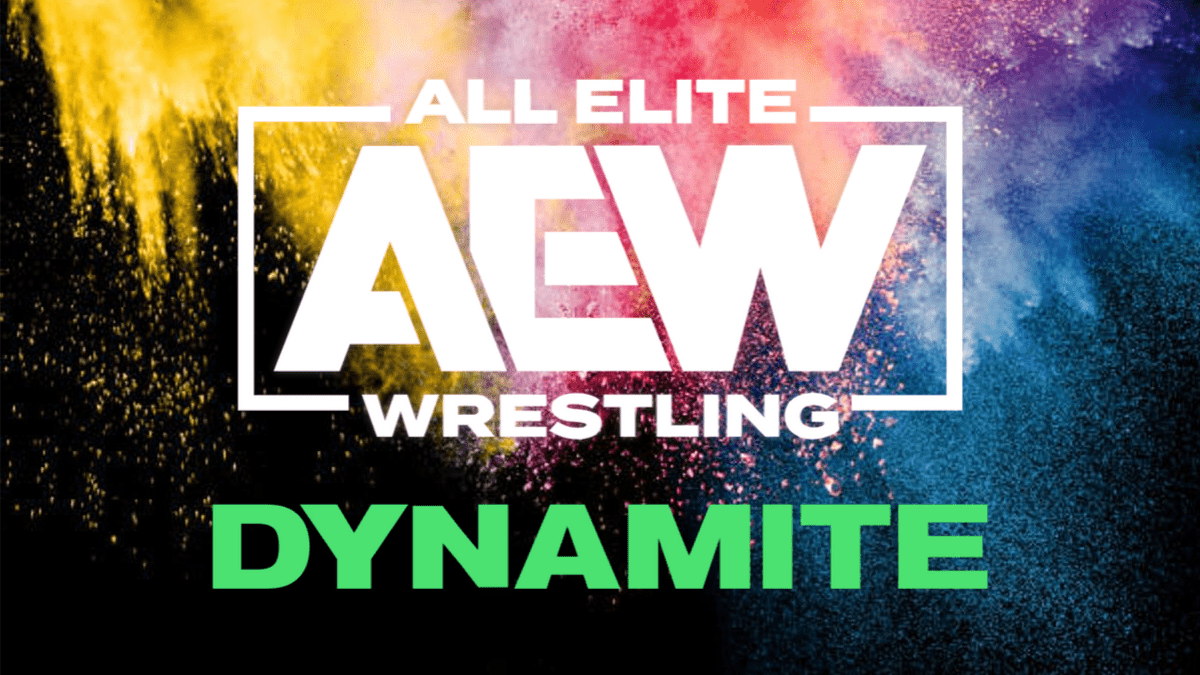 Welcome to Ringside News’ live results of AEW Dynamite. Tonight’s episode is billed as a “Holiday Bash” and will air on TNT after the Bucks/Celtics NBA game (estimated to be at 10:00 PM EST). Please feel free to refresh this page for constant updates while the show is airing while also leaving your reactions in the comments section.

Note: This is a taped show and you can check out the full spoilers here.

The Inner Circle (Chris Jericho and MJF) vs. Top Flight (Darius and Dante Martin)
Jericho and Darius trade shots. Darius connects with a quick enzuigiri and Top Flight showcase some double teaming. Both teams square off in the middle of the ring and exchange strikes. Top Flight connect with stereo corner punches along with stereo dropkicks. A distraction by Jake Hager at ringside allows the Inner Circle to isolate Dante. He fights off a superplex from Jericho and lands a high crossbody. This allows him to make the tag. Darius hits a standing spanish fly on Jericho and lands a dive to the floor onto MJF. He reenters the ring with a missile dropkick on MJF. MJF blocks a powerbomb from Dante with a powerbomb. Jericho adds a lionsault for a nearfall. Dante tries a quick rollup on Jericho to no avail. Top Flight land some insane double team maneuvers. Hardly know how to call it. Darius hits a double DDT on the Inner Circle. Hager gets involved again and trips up Darius. MJF hits the Heatseeker for the win.

After the match, Hager complains about Wardlow’s absence these past two weeks. Hager says he spoke to Tony Khan and he be wrestling Wardlow next week.

They air a rap video of The Acclaimed mocking the Young Bucks in anticipation of their match tonight.

Tony Schiavone is in the ring to interview Sting. Sting says that he has come full circle by being back on TNT. He talks about his time as a young wrestler watching Dusty Rhodes. Because of Dusty, Sting donned face paint for the first time. When he saw Cody in AEW, he had to be part of it. The crowd chants “welcome home.” Team Taz interrupts and accuses Sting of being completely selfish. Team Taz starts walking to the ring but the lights go off. When they come back on, Darby Allin is in the ring. Taz announces that Darby will defend the TNT Title against Brian Cage on January 6th. Team Taz walks away. Darby walks away while staring at Sting.

They show a video of MJF visiting Santana and Ortiz backstage. MJF explains to Santana that he has had a recent death in his family as well and that he’s here for him. Santana seems to react warmly to that.

The Dark Order (Colt Cabana, 5, and 10) vs. Jurassic Express (Jungle Boy, Luchasaurus, and Marko Stunt)
Stunt surprises Cabana with a hurricanrana and a dropkick. Jungle Boy catches 5 with a dropkick and hits a leg drop. Luchasaurus kicks away a kick from 10 and levels him with a brutal chop. Jurassic Express continually use Stunt as a projectile as they gain momentum. Dark Order use some double teaming to isolate Jungle Boy. We head to commercial. Back from break, Jungle Boy finds life with a lariat on 10 and makes the tag. Luchasaurus cleans house with a series of strikes. He hits a wheelbarrow german suplex on 5. Luchasaurus follows with a chokeslam into a standing moonsault. Stunt catches Cabana with a crossbody off of Luchasaurus’s shoulders. 5 hits a frog splash on Stunt for a nearfall. Jungle Boy superkicks 5. Luchasaurus military presses Stunt to the floor onto 10 and Cabana. Jungle Boy hits a powerbomb on 5 for the victory.

Alex Marvez is with Kenny Omega and Don Callis at their hotel. Callis complains about the wrestlers running the show in AEW. Omega points out all of the times that Rey Fenix has fell short in the past year. Omega tells Fenix that he can always go back to AAA after he loses in his AEW Title match.

The Butcher vs. PAC
Eddie Kingston joins commentary. Butcher tries to assert his power advantage but PAC dodges him. PAC connects with a sliding single-leg dropkick but runs into a diving crossbody. Butcher takes over. PAC is able to find some space with a kick to the face, but Butcher barrels over him again. We head to a break. Back from commercial, PAC is fighting back with leg kicks. He connects with a basement superkick and a shotgun dropkick. PAC goes up top but Blade provides a distraction by sending Penta into the ringpost. This allows Butcher to hit a pop-up slam and a powerbomb. Butcher starts to waste time as Kingston loses it on commentary. Kingston comes to ringside but Lance Archer appears to prevent him from interfering. PAC catches Butcher with a kick and lands the Black Arrow for the win.

After the match, PAC and Archer stare each other down in the ring.

Jade Cargill is backstage. She congratulates Brandi Rhodes on her pregnancy. Jade says the timing is awfully convenient. She wants a worthy opponent in AEW.

Tony Schiavone is with Kip Sabian, Penelope, and Miro. Sabian discusses how important the upcoming wedding is for AEW. Sabian tries to announce the wedding date but the Best Friends’ music plays. They reveal that it was all a ruse and show Trent being loaded onto an ambulance. They reveal the wedding date as February 9th on an episode of Dynamite entitled “Beach Break.”

Evil Uno vs. Dustin Rhodes
Uno attacks before the opening bell with a slap to the face. Dustin fights back with corner punches. Uno avoids a powerslam and connects with a dropkick. He misses a chop and his hand collides with the ringpost. Dustin lays in a series of strikes. Uno lands a top-rope swantan for a nearfall. We head to a commercial. Back from break, Uno hits a piledriver for a close two count. They exchange punches and kicks to the face. Dustin hits a running bulldog for the victory.

After the match, Uno offers a handshake but Dustin kicks. Stu Grayson attacks Uno. Lee Johnson tries to make the save to no avail. QT Marshall also fails. Lee Johnson fights off the Dark Order with a double springboard dropkick as the Nightmare Family stands tall.

Tony Schiavone is with Shawn Spears. Despite having a down year, his confidence is still high. Tony tries to offer constructive advice but that doesn’t go well. Spears says he’s leaving AEW and will come back when he feels like it.

Dash Gonzalez is with Hikaru Shida. Abadon tries to attack her, but staff members separate them.

Hikaru Shida vs. Alex Gracia
They trade dropkicks. Gracia tries a flash rollup to no avail. She catches Shida with a running kick. Shida hits a standing delayed vertical suplex. She connects with a running knee lift as Gracia is draped over the apron. Abadon appears at ringside and Shida immediately attacks her. In the ring, Shida blocks a headscissors and hits a falcon arrow for the win.

After the match, Abadon and Shida brawl at ringside. Abadon violently bites Shida on the neck. Shida is bleeding as Abadon stands tall.

AEW World Tag Team Titles: The Young Bucks (Matt and Nick Jackson) (c) vs. The Acclaimed (Max Caster and Anthony Bowens)
Matt catches Caster with a series of armdrags. The Bucks suplex Caster onto Bowens and hit a double team dropkick. Matt spears Caster onto the floor and Nick adds a springboard splash off the barricade. In the ring, Nick catches Bowens with a springboard double stomp. The Acclaimed find an opening to work over Matt. Nick interjects with a springboard crossbody onto Bowens. He finds success with his slingshot facebuster-moonsault combination. Caster slams Nick onto the apron and The Acclaimed take over as we head to commercial. Back from break, Nick is still being isolated. He dodges a double clothesline and makes the tag. Matt cleans house with a series of punches. He catches the Acclaimed with a double DDT. Nick punts Caster from the apron. Matt hits his rolling northern lights suplexes on Bowens. He transitions into a sharpshooter. Caster breaks up the hold momentarily but Matt reapplies it. Bowens is able to reach the bottom rope. The Bucks hit a doomsday device on Bowens for a nearfall. Caster sends Matt into the crowd and hits a superplex on Nick. The Acclaimed hit a suplex-crossbody combination for a two count. Everyone trades strikes. Nick accidentally superkicks the referee (Rick Knox). Caster low blows Nick and Bowens hits him with the boombox for a nearfall. Matt powerbombs Bowens through the ringside table. The Bucks hit the BTE Trigger to retain their titles.