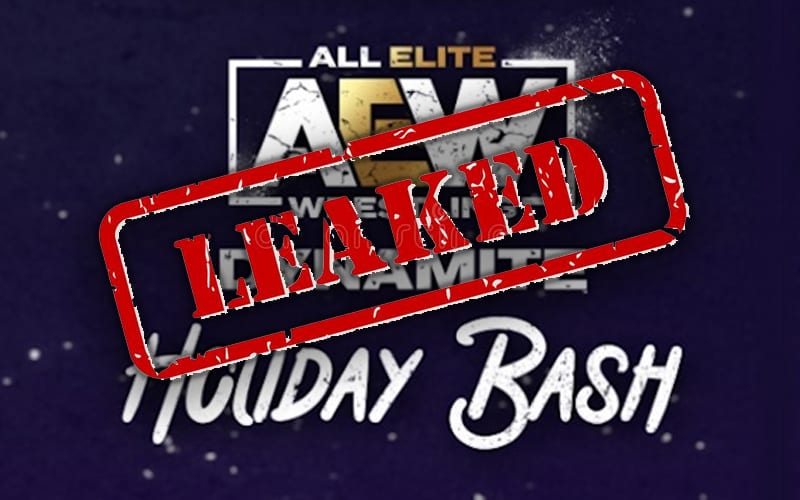 AEW Dynamite will air at a special time next week because of the NBA game on TNT. They will start the show at around 10:00 PM, or whenever the game is over. They have a “Holiday Bash” episode planned, but the show is already taped.

This is your big spoiler warning please do not read further if you don’t want to know what is going to happen next week on AEW Dynamite.

SpaceForce1 is at it again. The Redditor posted another set of full spoilers for the taped Dynamite next week. This Redditor has been spot-on in the past. Some people in AEW would really love to track this leaker down as well.

You can check out the full spoilers of what to expect from AEW Dynamite next week below.

Here are the results for the Dynamite Holiday Bash scheduled to air on the 23rd.

This match apparently went “quite long” and longer than expected. MJF picked up the win in the match. It wasn’t noted who he pinned. After the match, MJF and Chris Jericho cut a promo.

Sting had an in-ring interview with Tony Schiavone. Then Team Taz came out and they carried on the feud with Sting, Darby Allin and Cody. Team Taz almost attacked, but the lights went out. When the came back on “Sting was ready for them and he had backup.” It wasn’t noted who his backup was.

Jurassic Express won with the tandem toss powerbomb. After the match, Tully and FTR appeared on the big screen and they trash talked Luchasaurus for being a stupid dinosaur.

After an intense match, PAC won with a Black Arrow. After the match, Archer and PAC faced off in the ring and it looked heated. They didn’t fight and Archer walked away.

Kip Sabian cut a promo about his wedding with Penelope Ford. They were going to reveal the date on the big screen, but then the Best Friends’ music hit instead. Sabian and Miro acted upset, but they were just trolling. Then they aired another video from earlier in the night where Trent was being loaded onto a stretcher. As the ambulance left, Orange Cassidy and Chuck Taylor jumped in. Then they revealed that Kip Sabian and Penelope Ford will have a beach themed wedding at Beach Break on February 3rd. Miro was very excited.

After an intense and stiff match, Uno went for a splash in the corner and missed. Rhodes capitalized and won the match. After the match, Evil Uno tried once again to get Dustin Rhodes to Join The Dark Order. Rhodes kicks him and they retreat.

Shida won a squash match. Abadon came out afterward. They will wrestle eventually.

The Acclaimed vs. Young Bucks

The Young Bucks retained in a match that was full of super kicks and other “Young Bucks moves.” It was a good close for the show.

AEW Holiday Bash looks like a good show. We’ll have to wait until it airs to see how everything looks, but SpaceForce1 provided spoilers once again. So, at least you know what to expect.