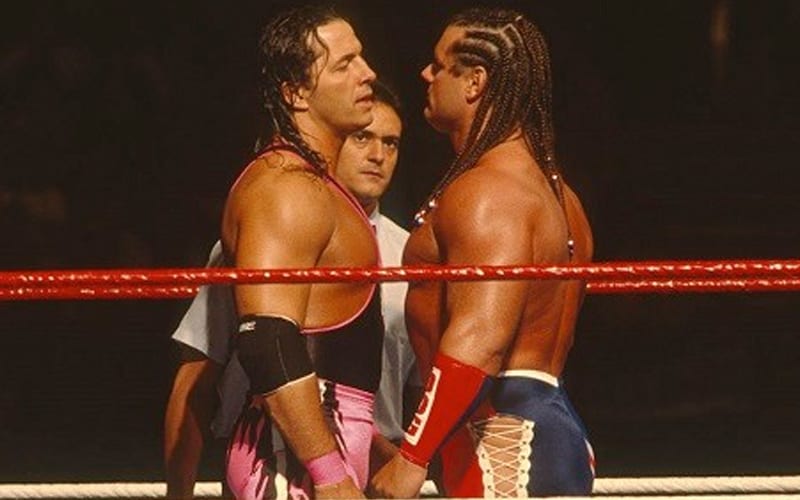 Pro wrestlers have a reputation of being tough, and sometimes they had to prove it. Bret Hart is no stranger to physicality, and neither was The “British Bulldog” Davey Boy Smith.

During his Confessions Of A Hitman series, a paid service through Bret Hart’s website, The Hitman revealed a very interesting story. He was traveling with Davey Boy Smith through Calgary, in the blistering cold, so many years ago. They had a brief altercation with another car on the road, and it turned ugly in a hurry.

“We were driving but before we got to Memorial Drive, at the light before that, six guys in a car, they just about hit us broadside and they swerved. They ran through a red light and came right at us, and we screeched on the brakes. And it was summertime, about 100º in Calgary, or 89 or 90º – it was a really hot night. And we pull up to the traffic light right on Memorial Drive and Edmonton Trail, and I remember I was just so tired and I had my arm out the window on my side. Davey had his arm out his window on the other side. Lou’s in the backseat, six-time world champion and one of the toughest guys there ever was in [pro] wrestling. He was about 80-something years old then.”

“And we pull up to the light and the guy over in the car driving looks over at Davey, and he says, ‘where did you learn to f*cking drive?’ And then the guy who was on the passenger side in that guy’s car jumped out of the car and ran around, and Davey opened up his car door and he jumped out of the car. And now Davey’s going toe to toe with the guy who had run around from the other side, so I slid over on my side of the car. And the doors were kind of–the way the doors opened, I was sort of boxed in. And there are five other guys in the car. They were so drunk they didn’t even know we stopped. They didn’t even know what happened. And so, at this traffic light in about 20 or 30 seconds, we knocked out all six of these guys.”

Bret Hart said that he remembers helping out Davey Boy Smith while he had one man on his back. The British Bulldog was about to bodyslam another man while Hart was left impressed by his brother-in-law’s physical ability.

“I just remember when I went to go help Davey, he had one guy on his back. He had the other guy in a bodyslam position. And I’m thinking, ‘that’s pretty impressive to me, to bodyslam somebody right on the pavement on Edmonton Trail.’ I pulled the guy off Davey. I pulled him off by the hair, and Davey, I remember watching it out of the corner of my eye, Davey bodyslammed this guy right on the pavement for real,. Just splatted him on the pavement. And then, I remember I had the guy I peeled off Davey, and I remember I didn’t know what to do with him so I had his head, I took it… banged his head on the trunk of the car. But I remember, he never did [put his hands up to block].”

“He kept his hands by his side, and I banged his head on the trunk of the car and I knocked him out cold. And it was all in about 30 or 40 seconds. We jumped back in the car, and I remember, when we drove off, I accidentally drove over somebody’s leg. I could see it in the rearview mirror. I didn’t know he was lying there out cold with his leg underneath the tire, but I could feel the bump as I went passed. I remember looking in the mirror and I go, ‘oh, God.’”

It turns out that this altercation wasn’t ignored by everyone. Legendary wrestler Lou Thesz was watching from the backseat as the entire brawl take place. He kept apologizing because he couldn’t help out in the chaos.

“And I remember Lou Thesz. He was watching the whole thing from the window with his glasses on. He was so [apologetic]. He kept apologizing to me for not getting out and helping us. I was like, ‘Lou, you’re 80 years old. No one expected you to get out. I didn’t even know we were going to get into a rumble.’ And it was just a funny memory, especially when I think back at how Davey was so tough in those days for his age. He bodyslammed that kid right on the pavement. I think it was a bad night for those guys.”

Pro wrestling is full of crazy road stories that some will never speak out. We’re not sure who those men were that Bret and Davey Boy Smith took care of that night, but they certainly proved their point.

If any of those men remembered the fight the next morning, they were probably very shocked the next time they turned on WWE programming and saw Bret Hart and Davey Boy Smith, two faces they probably never forgot.