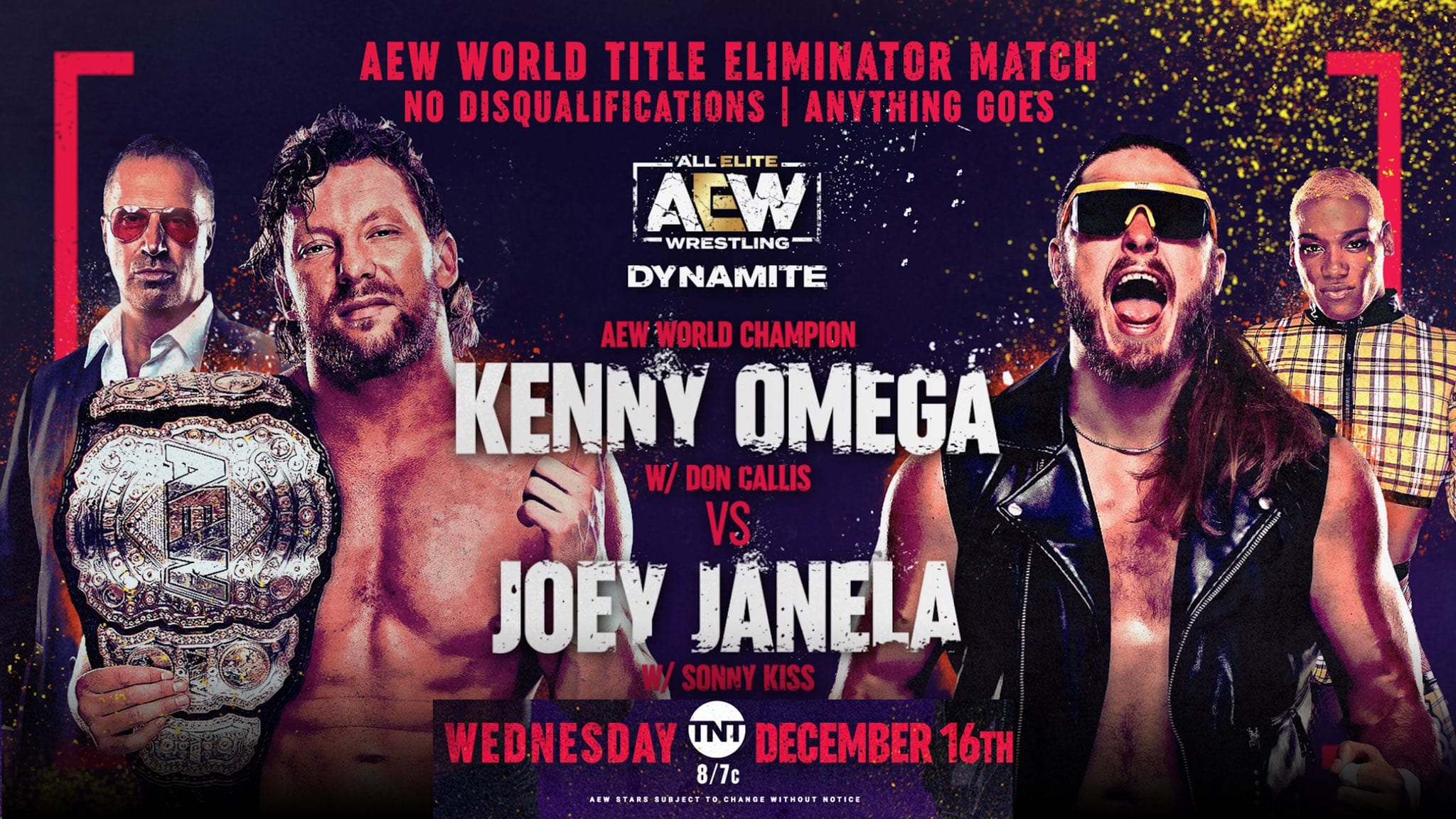 Welcome to Ringside News’ live coverage for the December 16th episode of AEW Dynamite! This episode will feature Kenny Omega wrestling for the first time in AEW since becoming world champion as well as a uniquely large 6-on-6 tag team match. The full card is as follows:

Hangman Page, John Silver, and Alex Reynolds vs. Matt Hardy and Private Party (Isiah Kassidy and Marq Quen)
Hangman and Quen wrestle to a stalemate. Hangman’s team connects with stereo boots and clothesline their opponents to the floor. Silver tries to celebrate with Hangman, but Hangman isn’t having it. Hangman lands a standing shooting star press onto Kassidy. He gets worked over until he avoids a lariat and makes the tag. Quen cleans house and Private Party showcase some double team offense. Silver hits a brainbuster on Hardy and tags out. Hangman hits a fallaway slam on Kassidy and takes out Hardy with a plancha. Hardy responds with the Side Effect for a nearfall. Reynolds hits a cravate suplex on Quen, reminding us all of Chris Hero. Hangman powerbombs Quen into a german suplex from Silver. Hardy makes the save. He hits a Twist of Fate on Silver onto the floor. Private Party hit Gin and Juice on Reynolds. Hardy steals the pin for the victory.

Alex Marvez is with the Inner Circle. Chris Jericho and MJF both try to take credit for the New York Times award.

A promo is played of Cody and Brandi Rhodes getting a Christmas package at their house. Inside is an ornament announcing that they are expecting a baby next year.

Cody Rhodes vs. Angelico
Cody snaps off a quick armdrag. They trade control of a wristlock and Angelico gets cocky. They criss-cross and Cody connects with a dropkick. We head to a commercial. Back from the break, Cody connects with a series of clotheslines. He follows with a powerslam. Angelico blocks a punch and applies an octopus hold. Cody has to bite the bottom rope to escape. Angelico dodges the Disaster Kick and starts working over Cody’s leg. He locks in the Navarro Death Lock but Cody makes it to the ropes. Cody runs up the ropes and hits an ace crusher for the win.

Team Taz comes out after the match. Taz mocks the sentimentality of Cody becoming a father. Taz threatens to have his team charge the ring but Sting makes his entrance. Team Taz retreats. Sting looks at Darby Allin in the crowd and walks away.

Alex Marvez is with Miro. He has been fined $75,000 for injuring AEW staff members last week. Miro says that he hates Orange Cassidy because he doesn’t care. There will be a huge announcement next week regarding the wedding date.

Eddie Kingston comes to the ring with a live microphone. He says he took out PAC and he’s not coming back. Lance Archer interrupts and they start brawling. The Butcher and the Blade come out to help Kingston. Penta and Fenix even the odds. PAC also appears out of nowhere. Everyone brawls and the babyfaces dominate. Archer and PAC get into an argument about who should beat up Kingston. They stand tall as Kingston and company retreat.

Dasha Gonzalez is with Dustin Rhodes. Dustin says that he rejects the Dark Order’s offer. He challenges Evil Uno to a match next week.

The Inner Circle (Chris Jericho, MJF, Sammy Guevara, Jake Hager, Santana, and Ortiz) vs. The Best Friends, Top Flight, and the Varsity Blondes
Orange Cassidy joins commentary with an unplugged headset. Jericho and Pillman start the match, wrestling for the first time ever. Pillman lands a springboard crossbody and connects with a dropkick. He follows with a somersault plancha to the floor. Dante and Guevara have a fast-paced exchange. Best Friends square off with Proud and Powerful for the first time since the parking lot brawl. That escalates into everyone brawling. The babyfaces conduct a six-way hug. The Inner Circle isolates Trent as we head to a break. Back from commercial, Trent still finds himself in the wrong corner. He connects with a running knee strike on Guevara and makes the tag. Dante lands a dive to the floor. Best Friends hit a Sole Food-half nelson suplex combination on Ortiz. Jericho hits Garrison with his bat. Hager hits the F10 (Wardlow’s finisher on Garrison). MJF covers for the win.

Alex Marvez is with Thunder Rosa. She cuts an impassioned promo on Britt Baker. Reba shows up and gets into Rosa’s face. Baker attacks Rosa from behind.

SCU (Christopher Daniels and Frankie Kazarian) vs. The Acclaimed (Max Caster and Anthony Bowens)
Kazarian hits an overhead suplex on Bowens. Daniels and Caster trade punches and Daniels connects with a missile dropkick. Bowens sends Kazarian into the ringpost and the Acclaimed work him over as we go to a break. Back from commercial, Kazarian hits a slingshot DDT on Caster and makes the tag. Daniels back drops Caster and hits an STO. He hits a blue thunder bomb on Bowens as well. Daniels lands a flying crossbody onto Bowens for a nearfall. Caster hits Daniels with a boombox. Bowens covers for the win.

Caster raps at the Young Bucks after the match. Bowens challenges the Bucks to an AEW Tag Team Title match next week.

Backstage, Top Flight challenges Chris Jericho and MJF to a match next week.

Ivelisse and Diamante vs. Serena Deeb and Big Swole
Deeb gets the better of an exchange with Ivelisse. Swole hits a backbreaker on Diamante followed by an overhead suplex. Ivelisse and Diamante find an opening to work over Swole. We head to a commercial. Back from the break, Swole find an opening to make the tag. Deeb hits a neckbreaker in the ropes on Ivelisse and hits a gutbuster. Diamante and Ivelisse respond with a double team slam on Deeb for a two count. Swole interjects and headbutts Diamante. She hits a sloppy tiger driver and applies a cloverleaf for the win.

Nyla Rose comes out to attack Deeb and Swole after the match. Red Velvet makes the save.

They show a video package on Jurassic Express. FTR come out to take issue with it, wondering if tag team wrestling matters anymore. Dax says that Jurassic Express is in the cross hairs of FTR.

Next week: Young Bucks vs. The Acclaimed for the titles; Chris Jericho and MJF vs. Top Flight; Hikaru Shida in action; Evil Uno vs. Dustin Rhodes; Jurassic Express vs. Colt Cabana, 5, and 10; PAC vs. The Butcher

No Disqualification: Kenny Omega vs. Joey Janela
If Janela wins, he will receive a title shot. Janela attacks Omega with a trash can during his entrance. Don Callis tries to kick Tony Schiavone off commentary but Tony refuses. Omega hits a Kotaru Crusher onto a chair. He sends Janela through a chair with a dive. Callis just starts doing commentary on the live microphone. In the ring, Omega lands a garbage can-assisted moonsault. He connects with a springboard double stomp. Janela counters a One-Winged Angel into a reverse hurricanrana. Sonny Kiss sets up a table at ringside. Janela leg drops Omega through the table. In the ring, Omega avoids a moonsault and connects with a few V Triggers. Omega hits the One-Winged Angel for the victory.

After the match, Death Triangle comes out to confront Omega. PAC says that he has unfinished business with Omega. He reminds Omega that Fenix never received his match against Omega. PAC reveals that Omega will face Fenix on December 30th for the AEW Title. Omega is furious as Dynamite ends.