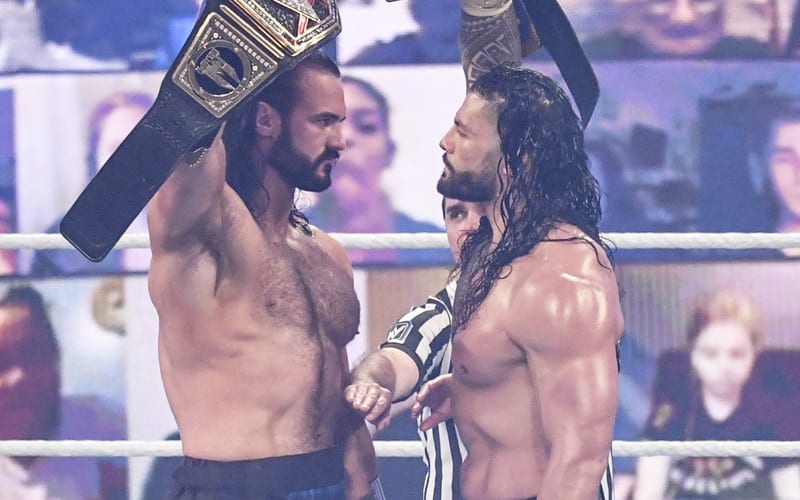 Roman Reigns defeated Drew McIntyre at Survivor Series, but the Tribal Chief had a harder time defeating the WWE Champion than he thought. McIntyre doesn’t seem like he’s finished with Reigns yet.

During his time on WWE The Bump, Drew McIntyre spoke about Roman Reigns for a bit. He isn’t happy about how the Tribal Chief changed since aligning himself with Paul Heyman.

McIntyre called Roman Reigns “a piece of crap” when it comes to his attitude. There’s no taking away from Reigns’ physical ability, but he doesn’t present himself in the same way at all.

“When I came back to the company after being gone for years and I’d seen how much Roman had grown, time after time, he talks that there are levels to this. It’s not just what you see in the ring, it’s what you do outside of the ring if you want to be the #1 guy it’s 24/7 365 days a year and he’s proven himself for years, but I wanted that top spot and I’ve been working my butt off to get there and I’ve had a 20-year journey also to get there. I feel like I’m on the top of my game and I feel like I’ve got a long ways to prove, but Roman took me lightly.”

“Paul Heyman’s got in his head and hopefully he’ll come back to earth to the Roman I knew when I first came back to being the workhorse because right now he’s just a piece of crap to be honest with you when it comes to his attitude, but he does get it done in the ring, and he is highly entertaining to watch.”

It might be a while before Roman Reigns is able to get back to Drew McIntyre. Brand lines separate them, and they are both still holding top titles. It certainly appears that there is unfinished business between them.

Interestingly enough, Goldberg was also on The Bump during that same episode. He called out Roman Reigns and said he’s coming for the Universal Champion. We’ll have to see who gets to the Tribal Chief first.