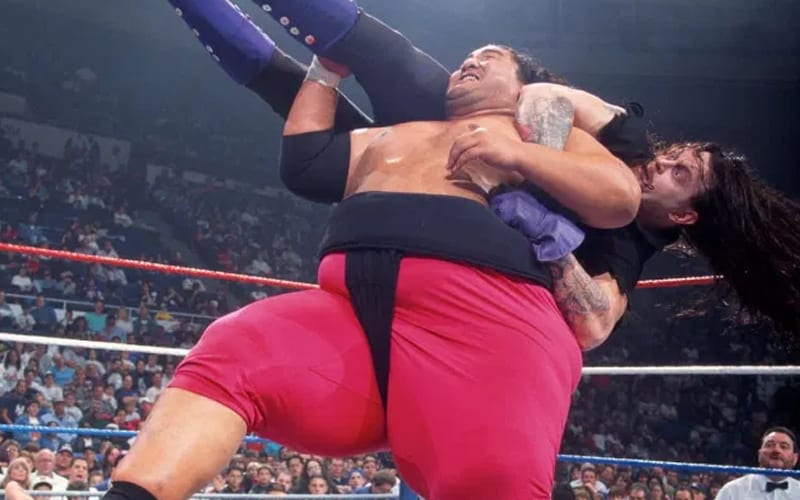 The Undertaker had a tight group of friends while he was traveling with WWE back in the day, and Yokozuna was a big part of that group, no pun intended. The massive Samoan, who Vince McMahon bestowed with a Japanese gimmick, was a good friend with The Undertaker, and he misses his friend to this day.

Yokozuna sadly passed away on October 23rd, 2000, just over twenty years ago. The Undertaker looks back at his friend fondly, but he doesn’t miss facing Yokozuna while there were a bunch of Samoans in the crowd.

While speaking to WWE The Bump, The Undertaker was asked to tell a story about Yokozuna. He had many battles with Yokozuna in the ring, but he always hated facing him in California for a very specific reason.

“I miss [Yokozuna] he was such a good dude, and taken from us way too early and just a phenomenal worker, but even better human being. He had a heart of gold, and a heart that was obviously as big as he was. He was so fun, I miss him so much. He was a great dude.”

“I hated working with him in California in San Francisco or LA where there were a lot of Samoans. Gosh, holy crap we’d be in a match and all of a sudden he’d hear [Samoan battle cry] and all of a sudden it was like lightening hit him and he would get fired up and start whooping me around. I would be like ‘oh boy here it comes, I’m about to get my tail kicked for the next five or ten minutes.'”

Yokozuna was born in San Francisco, so that likely brought a lot of the hometown crowd’s cheers his direction despite the phony Japanese gimmick.

The Undertaker is giving his Final Farewell at Survivor Series this Sunday. Plenty of his BSK friends will be there to send him off, and Yokozuna will certainly be there in spirit.