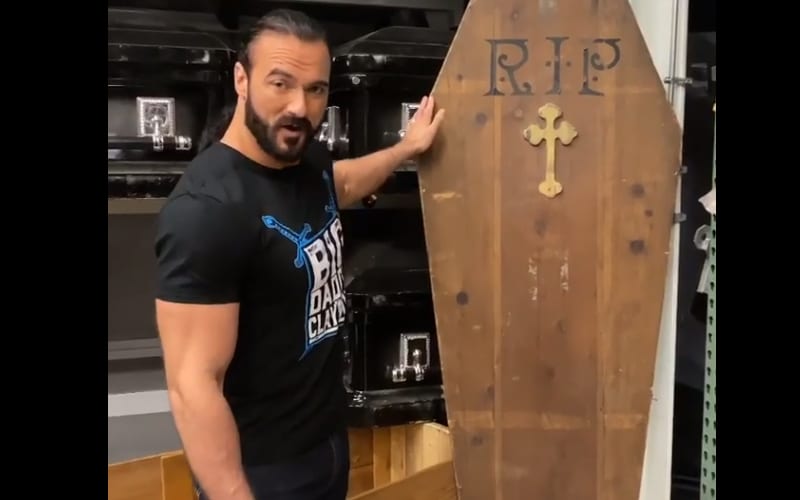 WWE has a huge warehouse full of history, and Drew McIntyre was recently invited to take a little tour. They filmed some footage in front of The Undertaker’s collection of caskets, and they’ve used quite a few for the amount of souls that The Deadman has buried.

Drew McIntyre showed off some of the caskets that they have in the warehouse, including the one from those original funeral parlor promos. It was quite an exciting find for Drew McIntyre.

McIntyre also took this opportunity to give fans an idea about what it was like having The Undertaker as a mentor.

“When I was 23 I remember sitting with Vince McMahon and he said, ‘The Undertaker is going to be in charge of you, he’s going to be your mentor. You listen to everything he says and nobody else.’ After that I would just follow him around like a kid and harass him all the time, driving him crazy I’m sure.”

“He was so advanced with his wrestling IQ that I had no idea what he was talking about. I would sit there and ask him questions and he would talk in riddles as far as I was concerned. I would say, ‘Sir, how was my match tonight?’ and it was either [in Undertaker impression] ‘Stop playing the wrestler and be the wrestler’ — I had no idea what he was talking about. It was just be yourself you’re trying too hard and the crowd can see that and know. Be in the moment and the crowd will be with you. Or, it was ‘How was it?’ — [in Undertaker impression] ‘It wasn’t good’ — ‘Thank you, sir!'”

Drew McIntyre also said that when he tried to grow a beard for the first time, The Undertaker told him, ‘I’ve got more hair on my ass than you do on your face, boy.” Obviously, Drew McIntyre got much better at growing out his facial hair, along with many other things, since then.