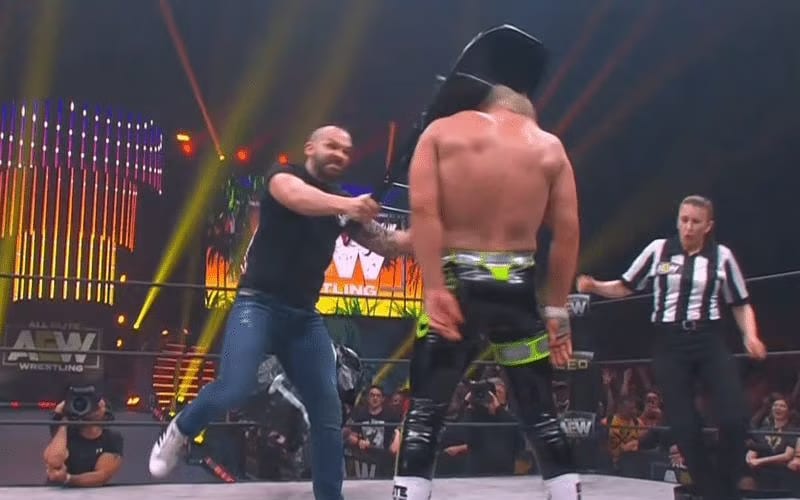 Shawn Spears approached Cody Rhodes at Fyter Fest, 2019 and he destroyed a chair over the American Nightmare’s head. That spot resulted in a bloody accident that fans are still talking about to this day.

During AEW Unrestricted, Cody Rhodes revealed how they came up with that gimmicked chair. They wanted to use something like a cookie sheet as the seat, and they ordered a chair to manufacture the prop. Things obviously didn’t go according to plan, and that resulted in Charlie Ramon, who was head of AEW’s props department losing his job.

“Here was the plan, the plan was, and I explain this because everyone was pretty adamant against it, I said, ‘we’ll do a chair shot to the head, but we will literally gimmick the chair.’ It would have been nice to have a person who knew how to do that. It went from, okay, my friend ordered this off Amazon and see if this would work, or if we take the cushion off, is it super thin like sheet metal, like a cookie sheet.”

“But then it won’t look like a wrestling steel chair. So what do we do? So Charlie Ramon, he saved Moxley in that moment. He’s been in a bunch of random segments. I would classify Charlie as what we would call our ‘Magic Department.’ It’s crafts. It’s props. In WWE, the department was called ‘Magic’. He was briefly the head of our props division. He was also fired the same day he was head of our props division because of how bad this all went.”

Cody told Shawn Spears how to swing that chair, and there were disastrous results. Rhodes also said that he witnessed Tony Khan and Jon Moxley both shouting at Shawn Spears after the segment, but Spears was only doing as he was told.

The segment did not work as planned at all, and AEW had to find someone else to make their props.

wpDiscuz
34
0
Would love your thoughts, please comment.x
()
x
| Reply
Report this comment
You are going to send email to
Move Comment