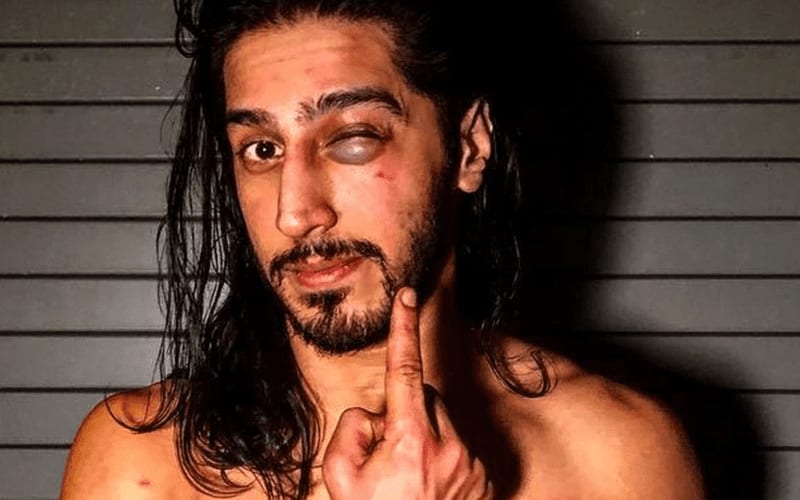 Mustafa Ali was set to get a push in WWE, but Randy Orton accidentally stomped him right in the face. The injury caused Ali to be pulled pulled from the Elimination Chamber match, a move that would set the spark for KofiMania.

While speaking to After The Bell, Ali detailed the entire experience in candid detail. He felt fine after that stomp, and he thought it was just a bad black eye. He even came back out later in the night and he took a bump through the announce table. The next week was set to be all about him, but Kingston took that spot in a gauntlet match and the rest is history.

“I don’t want to say it’s a hard topic for me, but I hate what if’s. There’s nothing you can do about it. That thing happened with Randy and it was an accident. My face got caved in. I haven’t disclosed all of this. As we all do, we get hit and we try to get back up. I got back up. I finished the match and assured everyone I was fine. I really thought I was fine. I wasn’t hiding anything.  I really thought it was a really bad black eye. They did the test and I was good. Later that night, I had to go back out for a big melee finish. Erik Rowan grabbed me by the face doing the claw, chokeslam on the table. I remember laying on the table going ugh, systems check and I was able to get back up on my own. I feel fine, I’m ok. I get word for next week that I’m in a gauntlet match and the plan is to make Mustafa Ali that night. Now I’m realizing this is my moment. They are building me up going into this big Elimination Chamber PPV for the WWE Championship.”

“This is what I’ve been working for my entire life. We have a live event loop leading into that TV. At one point, there was a tag match. I take a turnbuckle which I’ve taken a million times. I get to the back and I end up sitting Indian style right by gorilla. A ref walked by and asked if I was ok. I said yes. He went to get a doc. I’m sitting on the medical table and I am gripping the edge because I know if I let go, I’m going to tip over. The doc asked to see my hands, and when I did, I tilted over. I remember sitting in the hotel room that night and crying because I knew there was no way they were going to allow me to perform on SmackDown. The doc said I am going to be out a while.”

Mustafa Ali has a new chance with Retribution, and he intends to make a statement. He also wants people to put respect on his name and learn how to pronounce it. We’ll have to see what’s next for Mustafa Ali, but he’s had opportunities snatched from him in the past, and he certainly doesn’t want to repeat history.