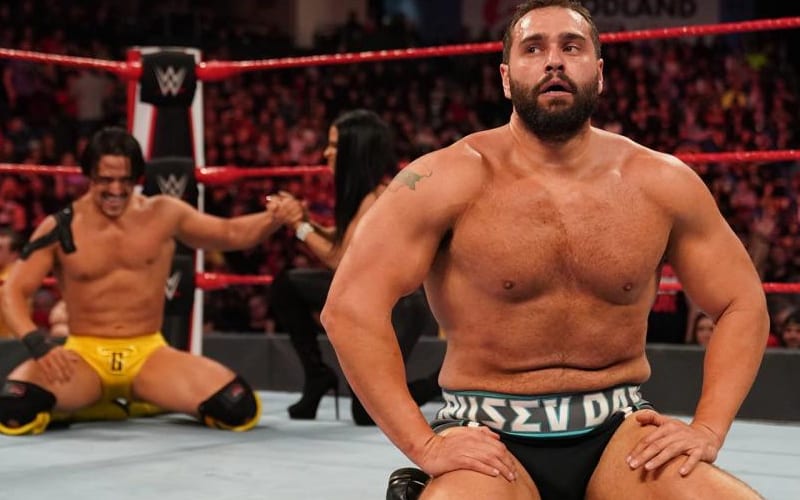 Miro is no longer in WWE, and he is happy about that from everything that he has said about the matter. His April 15th release came three years after he initially asked to be let go. His final match in the company was a loss, but that’s not how it was initially booked.

Rusev was in a feud with Bobby Lashley at the time, and it was all over Lana. Liv Morgan was a blip in that storyline as a shocking moment with zero planned follow-up. The Bulgarian Brute knew when he was wrestling his final match, but Vince McMahon changed the plans at the last minute to make sure he went out looking at the lights.

During Talk Is Jericho, Miro went into the entire experience in candid detail.

“I knew the last match I had on TV was my last match. It was me and Humberto Carillo against Garza and Bobby. The match started. We were supposed to go over. Next thing I know, I’m losing. Next thing I know, Garza is beating me. Not even Bobby who was the feud. I already don’t have any wins against these people. It doesn’t matter, I’m a professional and whatever you want to do, that’s what we do. Here comes the finish, a rollup, and the instructions were for him to leave the ring. Next thing you know I see the ref goes to his ear. Next thing you know, Angel goes to the corner and raises his hand while I’m in the ring selling a rollup. I turn around and I see what’s happening.”

“I charged him and beat the f*ck out of him. I saw him there and my eyes turned red because I knew what they were trying to do. I went after him and started clubbing him. He rolled out and I broke Joey Mercury’s rule which is if you are a babyface and you lose, you never raise your hand. I so wanted to stick it to everybody and say I don’t care who wins and loses because I am Miro and I raised my hand. I came to the back and Vince said he was going to give me a bonus because he said, ‘Oh, they tried to bury you out there and you tried to take care of yourself.’  Jericho said, ‘What, they aren’t going to do anything out there without telling him.’ Miro said Vince told him, ‘this is exactly what we wanted to see, very aggressive good stuff’ and that was my last match.”

The fact that Angel Garza pinned Rusev isn’t shameful. Garza is a great wrestler. The dig was the fact that Rusev lost to his opponent who he had zero history with. Bobby Lashley and Lana’s storyline was ended without much fanfare eventually as he got sick of her.

You can check out that match below.