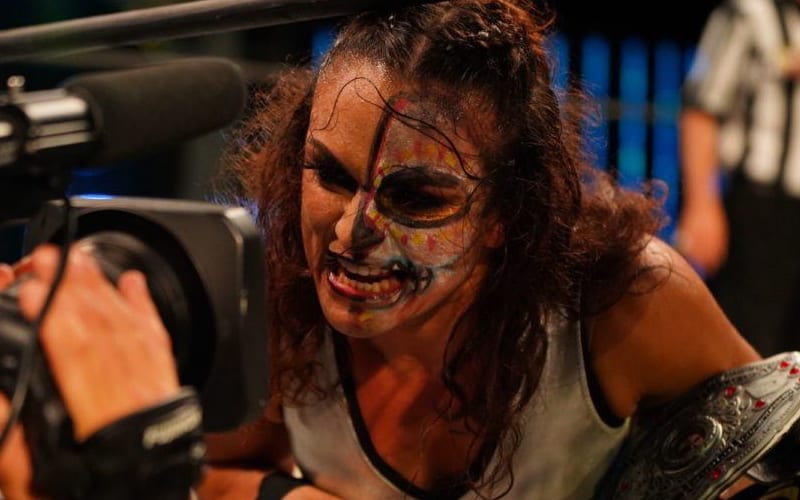 Thunder Rosa dropped the NWA Women’s Title, and then the AEW and WWE rumors started popping up. Billy Corgan made it very clear that she is still under contract into 2021.

Rosa recently stated that she has no idea where rumors about WWE came from. While speaking to Busted Open Radio, she had a chance to expand on her possible pro wrestling future.

She seemed to back away from the possibility of her joining WWE. Their talent restrictions would cause too much conflict. She obviously reads up on WWE’s policies about how they treat their Superstars and she’s not about that.

“I am signed with NWA and have another year with them. When it’s my time, it’s gonna be my time. When my time comes, I’m not going to come as just another person on the roster, mark my words. I’m coming for everything and I’m coming to be on top, just like I did this first time. My value is going to be bigger because I’m going to be a better wrestler, cut better promos, my body is going to be chiseled, I’m going to have a better MMA record. I’m gonna be like, ‘This is all I have to offer, what do you have to offer me?’ That’s what I want when I go to a bigger company. I want them to want me.”

“Because of all the projects I have on the side, it has to be a place where I’m able to continue working on what I’m working on. If I’m able to do it with NWA, then NWA. If I’m able to do it with AEW, probably. Now knowing what WWE is doing with things we have on the side, it’s going to be very difficult for me to work on my personal projects. Sometimes, those personal projects are the things that bring you the most joy in life. I don’t want that joy to be taken away from money. If that’s what I have to sacrifice, I’d rather be happy than be a slave.”

We’ll have to see what is in Thunder Rosa’ future. She has a ton of ability, but it’s about finding the best fit for her. A company like AEW would likely allow her to participate in those outside projects while WWE is forcing their Superstars off Twitch and closing their Cameo accounts.

In the end, Thunder Rosa has a very difficult decision to make and she still has a lot of thinking to do.