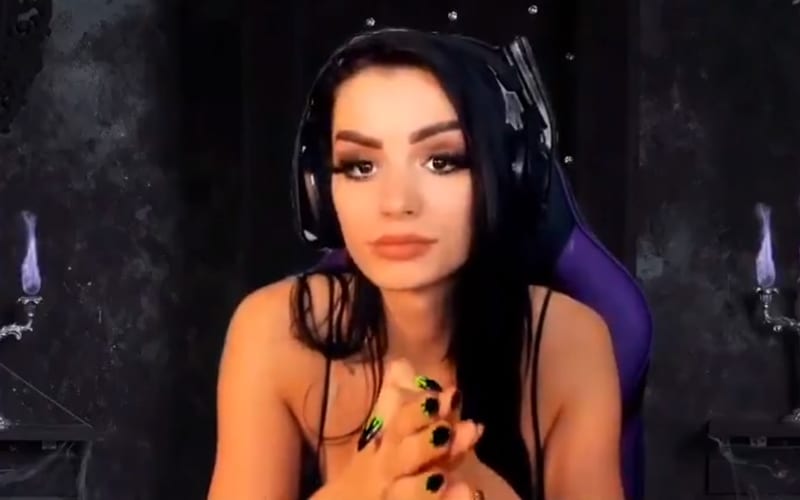 Paige was going along her business with her fans on Twitch. They were discussing horror movies and having a great time. Then the first-ever NXT Women’s Champion got a message on her phone that changed the mood.

We’re not certain what Paige read on her phone, but it caused her to speak about possibly leaving the platform. She could have read a report about other Superstars leaving Twitch, or she received a message herself from someone telling her to stop. Either way, she broke down and started getting very emotional after that.

She started texting someone on her phone again. Then she came back and continued to address the situation. She said that she can’t deal with “this company anymore.” She broke her neck twice and has built a wonderful community on Twitch. Since Vince McMahon isn’t making money on that it must end.

“I’ve honestly got to the point [where] I cannot deal with this company anymore … So now I have to make a very important decision … I’m f*cking tired, man. I broke my f*cking neck twice — twice — for this company. Over f*cking worked. I broke my f*cking neck twice for this company … All I wanted was to — they don’t realize that this community isn’t just about f*cking subs. It isn’t about that. We built a wonderful community, a wonderful f*cking family where this is an escape for a lot of people, including myself. I can’t wrestle anymore. I was worked so hard in WWE that I can’t wrestle anymore. My neck is f*cked. My whole dreams got taken away from me, dude. And I had to have something that fulfilled even a small part of that huge f*cking void that I lost with wrestling. A huge f*cking void. I couldn’t wrestle anymore, something I lived, breathed, f**king s**t wrestling since I was a fetus, dude. And it got ripped away from me. And I had to find something that even filled a little bit of that. And Twitch was such a wonderful thing for me. It’s such a wonderful place for me.”

“And I understand. I understand if they’re like, ‘Hey, if you’re wrestling every day, if you’re doing shows every day, if you’re on TV constantly,’ that’s fine. But I’m a f*cking injured wrestler, I can’t wrestle anymore. I get used for media stuff, sometimes, you know? But at the end of the day, I’m in my f**king house. I’m going f**king crazy, dude. I need something to keep me sane, man. And Twitch was my escape from that, you know? … Right now, I’m just sitting on my f*cking ass.”

She later added how awful the last few years have been for her. Her sex tape leaked, and she battled addiction. Now the community she had for support is being ripped away from her.

“I had a terrible couple of years, where I had a tape leaked about me, where I popped a couple of drug tests because I was in an abusive f*cking relationship, dude. And that’s the only thing I could f*cking do. See, people think I should be thankful that I still have a f*cking job, right? And I am, but it doesn’t mean I should be treated like f*cking shit.”

She continued streaming for a few more hours and said that she is going to “see how it goes.” Several WWE Superstars have removed themselves from Twitch and Cameo. Paige was also one who tweeted out about educating herself on unionizing not too long ago.