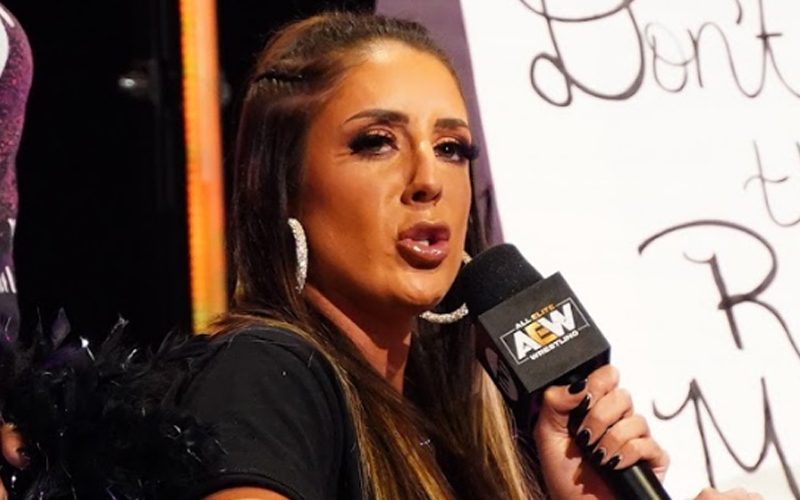 AEW took a huge hit when the COVID-19 pandemic swept the planet which made international travel impossible for a period of time. A majority of their Women’s Roster was stuck in Japan and unable to make it to Dynamite. Other injuries hurt the division even more, and Britt Baker says that they need fans to help by watching them.

Uproxx recently spoke with AEW’s resident dentist where she addressed some of the criticisms that the AEW Women’s’ Division has faced. She understands things, but she also said there are plans to grow the AEW Women’s Division as well.

The fact is that fans need to tune in and watch the women wrestle. She said it doesn’t hurt that they are the lowest rated segment on the show every week. If fans want to see women’s wrestling on AEW Dynamite then they need to watch and give AEW the ratings they need.

“Yeah, I definitely think it’s something the company is working on. You know, and we got hit hard—our women’s division, because of the COVID outbreak. Half our roster is international talent, so we immediately didn’t have access to any of those women. Then Kris Statlander got hurt, and I got hurt. And there’s only so much time on AEW Dynamite to start with.”

“And I know there are plans to grow the women’s division, but at the same time we need help from the fans at home too! We can’t have the women’s segments being the lowest rated or the lowest views each week. Because at the end of the day it’s a business, and AEW needs ratings.”

“It’s no secret we’re in a war every Wednesday night with NXT, so we need the ratings up. So for the fans that are so encouraging and saying, ‘We want more women, we want more women!’ That’s great, but please don’t turn the channel when the women are on TV then! We want everybody to be watching the segments and cheering us on from home.”

Hikaru Shida is set to put her AEW Women’s World Title on the line tonight on Dynamite against Big Swole. AEW is putting on the biggest anniversary show they can this week, but they’re always saving something for later.

We’ll have to see if fans tune in to see what the AEW Women’s Division has to offer because that is the best way to determine what fans want to see.