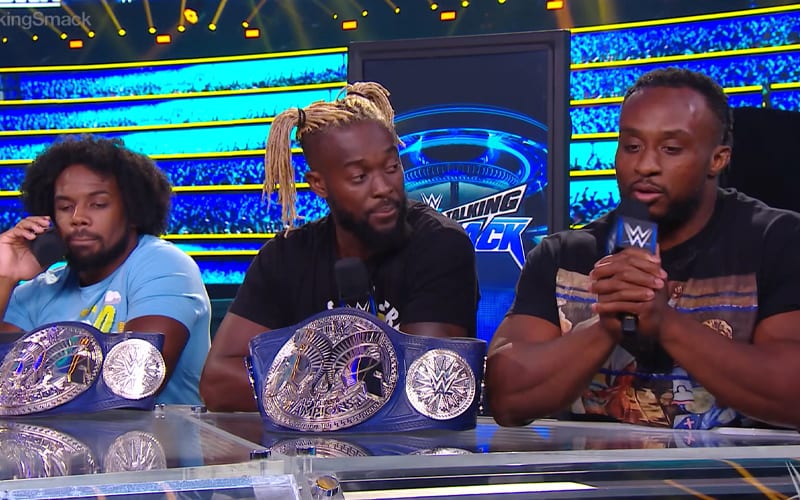 Big E was drafted to SmackDown during the 2020 WWE Draft, but Xavier Woods and Kofi Kingston were brought over to RAW as the blue brand’s tag team champions. This means a lot of things, but the most glaring item to mention is that the New Day are now split between brand lines.

The three New Day members showed up on Talking Smack this week. They had a chance to address the New Day’s split, and Big E spoke about how much this really hurts.

“It’s hard to put into words how much the last six years has meant to all of us. To think that could be gone, or paused, or on hiatus or whatever it is… hurts. It hurts on a real level because as cliche as it might be to say these are my brothers, but when I saw them today man, I was moved.”

“I mean the three of us haven’t been together since January or February and haven’t wrestled together since October of last year — we’re talking about a whole year. We all know Kofi doesn’t have many years left, you know [everyone laughed]”

Talking Smack cohost Sami Zayn said “even in the saddest of times” Big E has jokes. Kofi Kingston then said that if he’s around in ten years then “something’s wrong cause I don’t wanna linger!”

It is a sad time for WWE fans, and the New Day too. The trio will get to wrestle with each other once more at least. Next week will feature a six-man tag team match with New Day against Cesaro, Shinsuke Nakamura, and Sheamus.