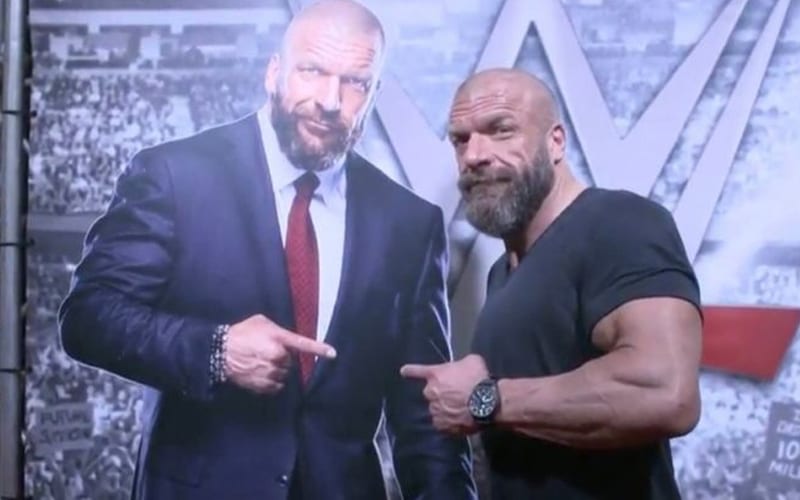 WWE has a lot of traditions and pointing at things is a part of a couple big ones. Triple H’s tendency to stand next to an NXT Superstar after a big moment while pointing at them is expected by fans at this point.

During his time on WWE The Bump, Triple H spoke about how his famous Point started. Before the WWE Network was around this was a way to get the word out that someone was worth paying attention to. Triple H would just point at a Superstar and send out a social media blast. Now it is a tradition that has continued for years.

“‘The point’ was a way to get talent out there because we didn’t have a place to distribute them and get them more well-known. We were doing everything we could outside of that, but that’s what ‘The Point’ was to pick up some traffic with it and you know at first we started doing it and we would get to a place where somebody would win the title and the second they walked back there they’d be like ‘Hey can we do The Point picture?’ and it just kinda became.”

The Game said that he also learned a lesson through pointing because sometimes he would himself pointing at parts of a Superstar’s body that wasn’t intended. It seems he’s getting that pointer finger ready to snap another photo if needed at NXT TakeOver: 31 on Sunday.

Triple H said it’s funny to him because people talk about it. It’s kind of like how people make fun of the Royal Rumble winner for pointing at the WrestleMania sign, but at the same time every Superstar in that situation can’t wait to have all of the things that go along with that moment which includes those pointing traditions.