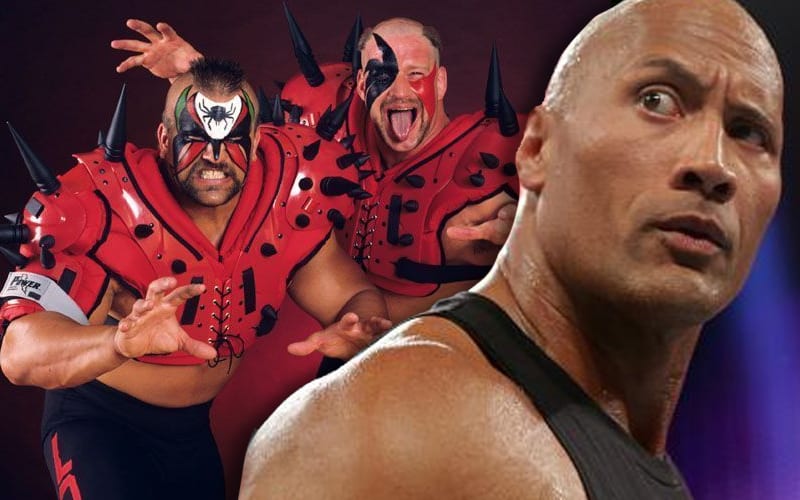 The world lost a great man when Road Warrior Animal passed away. The pro wrestling world mourned his passing as it made mainstream headlines. That team was responsible for inspiring and entertaining millions including The Rock.

Dwayne Johnson sent out a heartfelt tribute to Animal following his passing. He spoke about wrestling the Legion Of Doom while he was a very young version of the Superstar who became the Most Electrifying Entertainer in Sports Entertainment history.

RIP brother.
Really saddened to wake up to this news today — the passing of my friend, Joe Laurinaitis (on the left) aka ROAD WARRIOR ANIMAL.
Joe & Mike aka HAWK & ANIMAL, THE ROAD WARRIORS were the most intense, legit tough bad asses tag team in the history of the wild world of pro wrestling.
When I was making my bones, still learning the business in the WWE as a very young “The Rock” – I wrestled these guys so many times on the road and they always took good care of me and made sure I learned.
Tough as nails.
Good men.
Greatest tag team of all time.
And apple fritters (our inside joke).
Much love and I’ll always be grateful to you both.
RIP.
#animal
#hawk
#lod
#whatarush

Many people were important to The Rock as he learned the pro wrestling business. The Legion Of Doom were veterans in the WWE locker room when Dwayne Johnson’s star in the company was just starting to rise. If it weren’t for people like Animal and Hawk then The Rock might have lost out on some valuable experiences that helped him become the household name he is today.