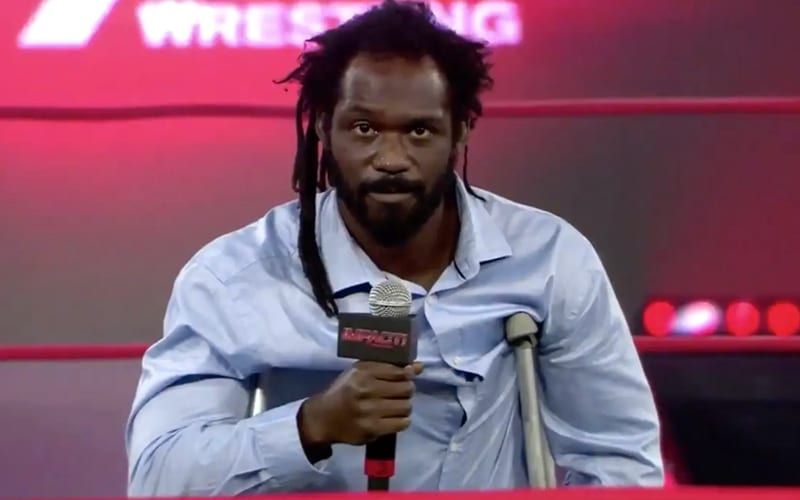 The pro wrestling ring is an unpredictable place. It can also be very dangerous. Rich Swann realizes that all too well.

Rich Swann is coming back from a near career-ending injury. Thankfully, he was able to recover and wrestle again another day. He has a huge Bound For Glory match for the Impact World Title now because of it.

During Wrestling Observer Radio, Rich Swann discussed his recovery from injury. He had way more than just an Achilles injury. He nearly suffered a compound fracture where his bone was coming through his skin.

“Oh yes indeed [it was much more than an Achilles injury.] So what happened was basically I was standing up and I got senton’d and so, my Achilles was crushed like a soda can, my ankle was just like — it was placed up into my shin.”

“My foot was just peeled back. The other side of my ankle on the right side was just up in my calf then my fibula broke clean and it was almost similar to the Sycho Sid. Everybody’s familiar with that.”

“One of the most horrific injuries in the industry. But yeah, it was very similar to that. My fibula was broken clean and it was broken to the point where the bone was just sticking at the skin and it was almost a compound fracture, and so I had my mind on that and then I didn’t even realize that my back was also fractured as well so once I got the CAT scan and MRIs and everything, that was brought up as well to my attention and it was rough man.”

Rich Swann fought on and surprised his doctor. Now he is cleared to compete when he feared he would be told that a return was impossible. He was able to overcome a terrible obstacle in his career, but now he has another big challenge as he tries to pry the Impact World Title away from Eric Young.