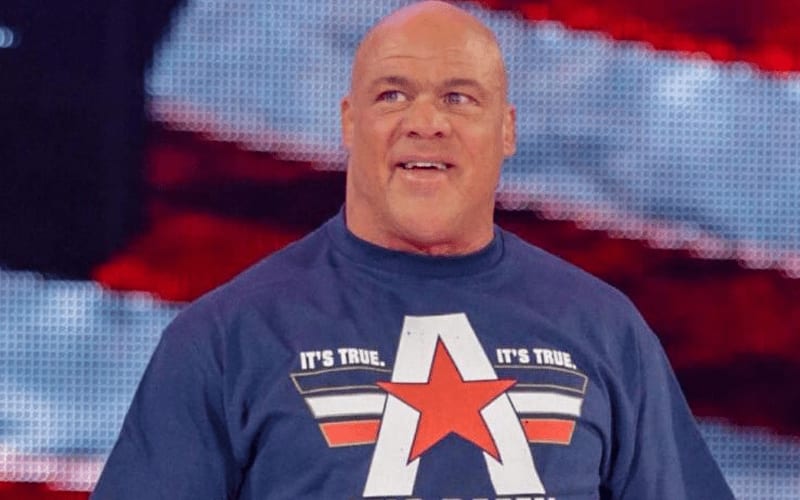 AEW opened their doors and it was impossible not to compare them to WWE. Now that AEW’s roster seems to be filling up with former WWE Superstars it makes those comparisons even harder to ignore. It’s not likely that AEW will “beat” WWE because Vince McMahon had decades to build his company, but AEW isn’t going away any time soon.

While speaking with Wrestling Inc, Kurt Angle said that going to AEW is not going to happen for him. He does hope that AEW continues to grow and find success. It won’t come easy against a juggernaut like WWE.

“WWE’s just a money machine no matter what happens. Regardless of how many tickets they sell, their TV deals alone are worth hundreds of millions of dollars a year. You got a billion dollar deal with FOX. You got a billion dollar deal with USA Network. That alone, NXT, RAW and SmackDown, you’re doing about $450 million a year in revenue for TV, just those three. Then they have the other International TV deals and everything else. So it’s a money machine. I think AEW’s going to need to pick up more TV deals as long as they’re making money, they’ll survive, but I don’t I don’t know if Tony Khan wants to continue to throw millions of dollars when there’s not going to be anything coming back, but I’m changing my mind now.”

“I think they got a little momentum, and I think they’re gonna survive at least for several years. So they’ve done a great job, and they continue to climb little by little in ratings. I heard they beat NXT so something’s going on. Jericho and Cody and all the other guys, they’re doing something over there, and I also know it’s a little more laid back there. You get your own creativity and do your own things. So it’s a little different than WWE, but I think they’ll have a good run. I don’t know how long will it be, but hopefully, it’ll be a long time because it’s great for all the wrestlers, but WWE is number one. I don’t see it ever going number two.”

WWE is a “money machine.” They don’t have to sell another ticket because their television deals are so huge. This is something that the company can rely on which makes it nearly impossible to topple them.

If AEW wants to continue they need to focus on securing television deals and push to continue that momentum as they climb in the ratings. Kurt Angle thinks that AEW will have “a good run,” but AEW fans are obviously hoping for much more.