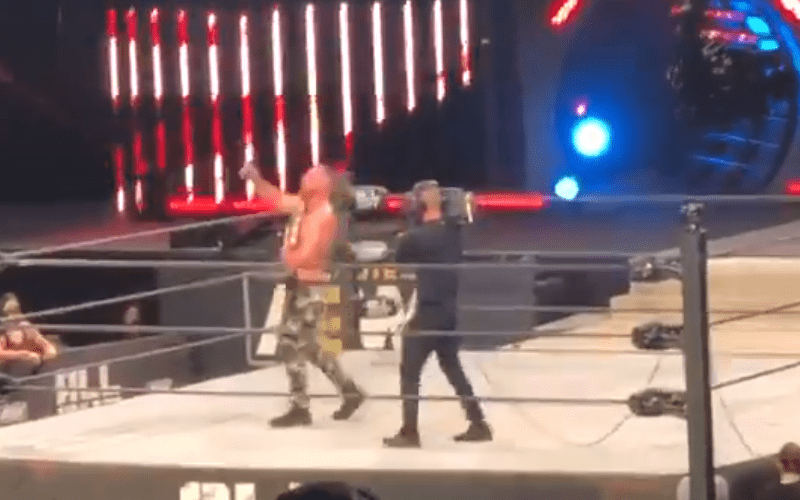 Jon Moxley defeated MJF to retain the AEW World Title at All Out. He did so by using the Paradigm Shift which was a moved banned in that match. Odds are MJF will have a lot to say about that, but after All Out concluded Moxley had something to say to the fans in Daily’s Place.

AEW started selling tickets to fans and their system of social distancing and mandatory masks seems to be working so far. They went closer to 15% capacity than ever before with last night’s pay-per-view inside the open air amphitheater.

Jon Moxley got on the microphone following his win and thanked fans. He said that it is “so good to hear your voices tonight. I wouldn’t have it any other way going to war than right here in front of AEW fans — the best fans in pro wrestling.”

While Moxley cut his promo, MJF was still laid out on the mat following his crushing defeat. As MJF left, Mox said that “cheaters never win” and “running your mouth don’t mean sh*t unless you’re willing to back it up and that goes for wrestling and that goes for life.”

Before Mox left, he encouraged the fans to cheer so loud that they “hear you in Orlando, Hell, let them hear you in Stamford!” Or course, Orlando and Stamford are two cities synonymous with being the base of WWE operations.

Before Moxley left he encouraged fans to keep trucking and keep their heads up “and we’ll all get through this goddamn year soon enough.” Hopefully, those 2020 problems don’t roll over.