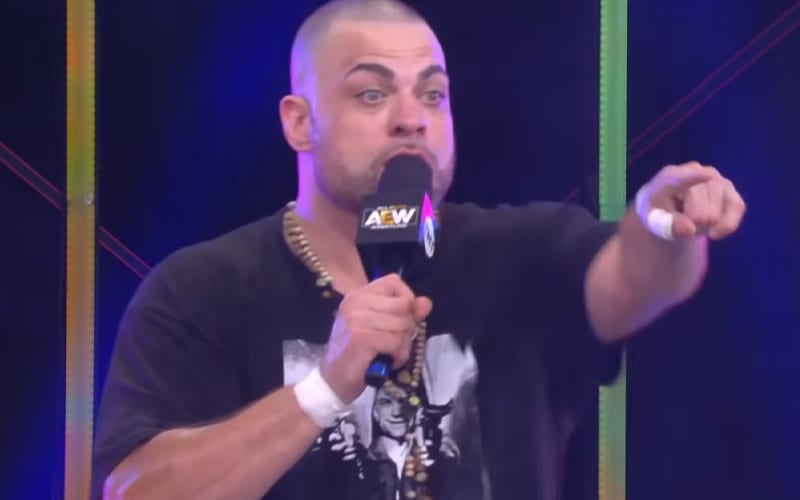 Eddie Kingston was a man who AEW fans wanted to see in the ring. He received a big opportunity as he faced Cody Rhodes for the TNT Title on Dynamite. Kingston didn’t win that match, but he received something so much better: a job.

WWE is paying close attention to AEW. They also have a few people that they want from the indies. Apparently, seeing Kingston on AEW Dynamite convinced WWE to give him a call.

While speaking to Talk Is Jericho, Eddie Kingston revealed that WWE called him about a job at the Performance Center after they saw him working for AEW.

KINGSTON: But my thing was, and I told them, I can’t collect a paycheck if I didn’t earn it. They were like, ‘What do you mean?’ And my thing was, I was gonna go in there, coach, be bitter and angry about coaching, not getting a shot. And these guys who don’t, they love wrestling now cause they’re at the Performance Center, no offense to them …

JERICHO: No. Getting paid.

JERICHO: It’s great when you’re under contract in your first year.

KINGSTON: But when you’re on the road getting paid hot dogs and soda …. But I would’ve been so bitter and angry. I wouldn’t have done a good job. I would have been detrimental to those kids. So I was like, “Naw, I’m good.”

Eddie Kingston obviously decided to sign with AEW and he told WWE no. It makes us have to wonder how things could be much different right now in AEW if he decided to take WWE up on their offer.

Kingston is currently leading The Lucha Bros and The Butcher & The Blade into battle. He’s getting time on the microphone, and he is building his brand his own way. That is an opportunity he likely would have never received in WWE.