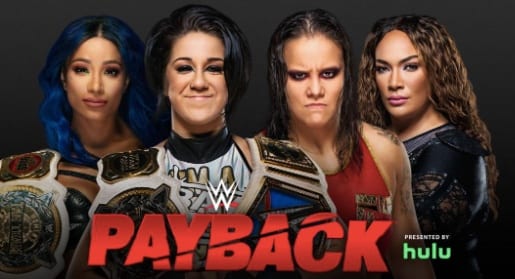 As seen on Sky Bet, the betting odds for Bayley & Sasha Banks vs Shayna Baszler & Nia Jax at WWE Payback have been released.

The Women’s Tag Team Championship will be on the line in this bout as the makeshift partnership of Baszler and Jax will attempt to wrestle the belts away from the dominant best friend duo of Bayley and Banks.

Of course, while many will favor Sasha and Bayley due to their overwhelming dominance in the women’s division as of late, all good things must come to an end at some point.

At this moment in time, Shayna and Nia are actually the favorites to become champions with odds of 8/11. Bayley and Banks, on the other hand, are the narrow underdogs at 1/1.

If we do see new champions crowned on Sunday, don’t be surprised if they wind up holding the belts for a long, long time to come.