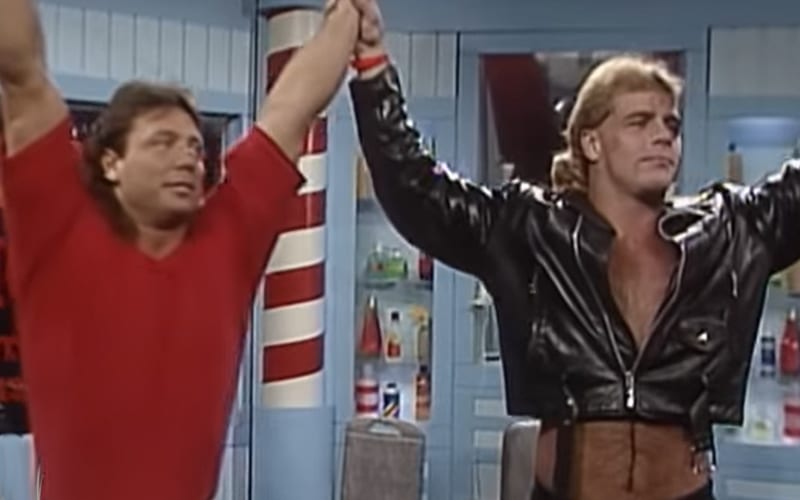 Marty Jannetty and Shawn Michaels entered WWE as The Rockers, but they didn’t remain that way forever. Fans of Jannetty were very disappointed as the opposite Rocker was the one who became Mr. WrestleMania.

Jannetty made headlines in recent weeks after claiming that he killed a man during an attempted rape outside a bowling ally in the early 70’s. He’s one to tell a story and he now has his own Party With Marty show to discuss his history in the business.

During Party With Marty, he discussed a time when The Rockers called Vince McMahon to inform him that they were leaving. WWE wasn’t paying them enough and they wanted out, but they didn’t want to get beat down for 90 days prior to their release.

“So, I said, ‘Vince, we want to do this properly. Do we need to write? How do we give our notice?’ ‘Well, what’s the problem?’ I said, ‘No, there’s no more talking’, and Shawn was standing right here. So, he’s not hearing Vince’s part because there was no speakerphone on the payphone, but he’s hearing what I’m saying,” stated Jannetty. “I said, ‘No Vince, we already talked about this and the money situation, and there’s no more talking. We just saw our contract agreement for this commercial, and you kind of lied to us, and so, we’re just going to put our notice in.’

“He says something to the effect of, ‘Well, do you want to come in and talk at TV?’ I said, ‘There’s no more talking.’ Now Shawn is hearing this and he’s just sitting there not saying a word, just listening, and I said, ‘So how do we do this notice?’ He goes, ‘Well, let me look. I really wish you would reconsider.’ I said, ‘No, we’ve done everything right’, and he’s looking and you hear him flipping pages. He goes, ‘Well, Survivor Series is in three weeks. I’ll let ya’ll finish up there.'”

Marty Jannetty was very happy that McMahon was letting them go in three weeks instead of three months. They would be able to keep much more heat that way because WWE wouldn’t be beating them down for 90 days. HBK got the different idea from Jannetty’s reaction.

In the end, Michaels showed his true intentions because he couldn’t believe Vince McMahon would let them quit the company. This was the first big sign that he didn’t want to exit WWE.

“So, me being glad we’re not getting beat for 90 days, I’m happy, Shawn – when I said he’s letting us finish up at Survivor Series – this was Shawn’s reaction, ‘He’s f*cking going to let us quit?’ As soon as he said that, I’m like, ‘What do you mean let us quit? Didn’t you just tell me to come over here and tell him we quit?’

Jannetty then had another call with Vince McMahon, but Michaels wasn’t there. He said that HBK had already been in contact with McMahon and expressed a much different desire for his future in pro wrestling.

“[Vince] says, ‘Marty, I really don’t know what to say about the decision you made. You’re welcome to stay on and wrestle singles’, and I was like, ‘No, Vince. Thank you, but Shawn and I made this decision together. I’m not going to go behind his back.’ He goes, ‘Well, that’s kind of funny. I just talked to him and he said that he had nothing to do with that. That was all your doing. So, he’s going to stay on.’ ‘Huh!?’ I didn’t even say bye. I hung up and called Shawn.”

“I said, ‘Shawn, tell me that ain’t true. Tell me it ain’t true.’ He was quiet. I said, ‘You called Vince and said that was my idea, you had nothing to do with it, and you’re going to stay on?’ He says, ‘Marty, on the flight home, I got to think about it, and man, you’re single and I’m married. You know, your house is paid off, I’ve still got to pay on mine. I just can’t quit like that.’ I said, ‘Well, that’s fine! Why didn’t you tell me that rather than tell me to call Vince and say we quit?’ He got real quiet and he’s just saying he was sorry.”

Marty Jannetty ended up leaving WWE, but he did come back for a much shorter run later on. He received a third chance as well, but Jannetty never found the same footing he once had as a Rocker.

Shawn Michaels’ career a much different story as he became a two-time WWE Hall Of Famer. Odds aren’t great that he will pick up a third ring as a member of the Rockers, but you never know what can happen in WWE.

The rest is history: