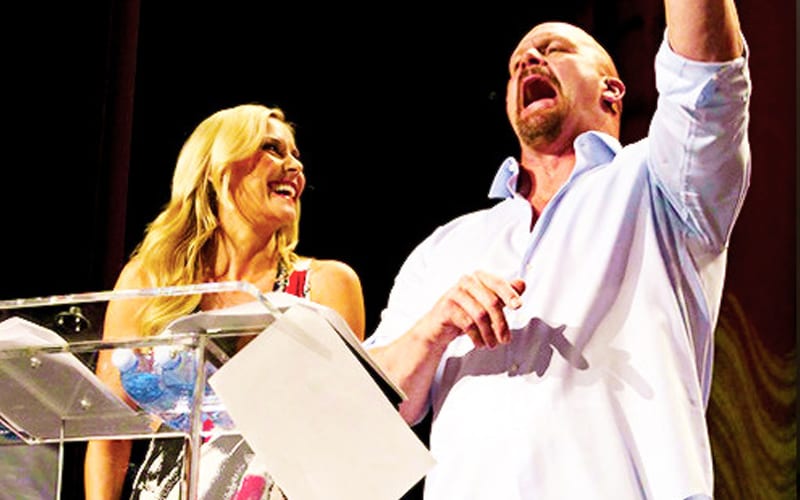 Renee Young contracted COVID-19 and she had to take time off to fight that virus. She thankfully pulled through, but even her husband Jon Moxley admitted that it was a scary time.

WWE executives including Vince McMahon and Triple H did not call her during her battle with COVID-19. “Stone Cold” Steve Austin did call and it meant the world to her.

Renee Young penned an open letter to WWE upon her exit from the company. During her long goodbye to the company, she revealed that she was shocked while in a COVID daze by a voice she didn’t expect to hear from.

Like — earlier this year, I got sick with COVID. And I’m lying there in bed, just sort of like, UGH. BLAH. BLECH. Everything sucks. I feel terrible. And then suddenly my phone rings. And I reach over and grab it, and look at it. And on the caller name it just says:

“HEY KID, IT’S STEVE HERE. JUST WANTED TO MAKE SURE YOU’RE ALRIGHT. WANTED TO CALL ABOUT WHAT YOUR SYMPTOMS ARE LIKE, SEE WHAT’S WHAT. KNOW YOU’RE STAYING TOUGH.”

Oh, right, OK, for sure. It’s just Stone Cold Steve Austin — checking in. He wants to see how my COVID is doing.

How could I explain to 2012 Renee what her life will be like in eight years? What kind of amazing adventures she’ll have been on?

Oh, yeah — and how do I tell her that she marries a wrestler???

Renee Young’s life has been pretty fantastic since joining WWE. Eight years later, she is moving on, but she will never forget the incredible experiences that she racked up along the way.

Young might have signed a non-compete clause with WWE, but that won’t last forever. It’s thought that she’s bound to appear for AEW eventually. The world is wide open for Renee now as she changed her social media name to drop the WWE moniker and fully set out on her own.