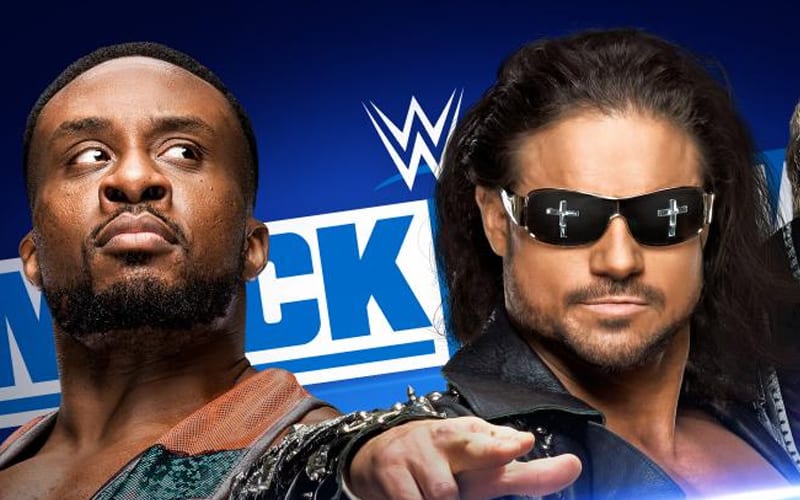 This is the final SmackDown before everything goes live again. The Amway Center will soon be the new home of WWE programming. Let’s see what they do at the PC to say goodbye.

Braun Strowman and Bray Wyatt will have some sort of a showdown this week. Alexa Bliss will also have a sit-down interview where she will address this new storyline with The Fiend.

Big E will also take on John Morrison in singles action. You can also never forget about Retribution as they are always running around causing chaos. All that and more is slated for this week.

The show started with a video package about Retribution.

Michael Cole and Corey Graves said they have extra security to make sure that Retribution won’t pull a repeat invasion.

Miz wasn’t with Morrison at ringside. The lights started flickering and a masked man got in the ring. Then they started to flood the ring. The broadcast kicked off with an invasion.

The Retribution members destroyed Big E and John Morrison. On of them hit Big E with a spear and then they all left.

After commercial, a bunch of the roster was backstage. Morrison blamed Big E for riling Retribution up. The Miz said he would have been at ringside, but he was on the phone with Maryse.

King Corbin said they are under attack. Big E was then determined to go out later and have his match with Morrison. Then Sheamus came in and started mocking Big E by calling him weak because that’s why retribution attacked him in the first place.

Back in the ring, security is all around the ringside area with Banks and Bayley in the ring. Bayley said it’s time to get the show on the road. Nobody is going to interrupt them.

Banks addressed facing Asuka at SummerSlam. Then she said they will have to defend their WWE Women’s Tag Team Title at Payback, but she didn’t announce their opponents.

Bayley introduced everyone in the battle royal and made fun of them. Then Asuka came down and started fighting them.

Ruby Riott was eliminated soon as she protected Liv. Then Tegan was in trouble, but Billie Kay and Peyton were throw out. Liv was thrown out too and then the IIconics and Riott Squad brawled.

Nikki Cross was tossed out by Tamina. Then she had a face off with Bianca Belair. Shotzi and Tegan were taken out with a double clothesline by Tamina, but not taken out of the match. Belair speared Tamina and then threw Tamina out of the ring.

Naomi and Lacey Evans squared off and then Evans took The Glow out of the match with a Women’s Right. Shotzi Blackheart kicked Evans out of the match. Baszler brought Blackheart over the rope and Evans dragged her to the floor. Shotzi got in Evans’ face as Tegan and Belair continued in the ring.

Then Belair took herself out as Tegan lowered the top rope and moved out of the way of a charge. It was Tegan, Asuka, and Baszler as the final three in the match.

Baszler hauled Tegan over the rope and then Dana Brooke revealed that she was still in the match as she took Nox out of the match. Dana jumped in the ring and flipped right into a Clutch and the Asuka nailed Dana to take her out.

It was down to Asuka and Shayna Baszler. Bayley looked nervous. Asuka kicked Bayley and Sasha as they tried to take her out of the match. Then Baszler “eliminated” Asuka, but she landed on Banks and Bayley wasn’t eliminated.

So Asuka got in and tossed Shayna out to win.

After commercial, they cut to Bayley and Banks backstage and Asuka attacked her before they did a pull apart.

Mandy Rose cut a promo backstage in her new short hair. She listed her accomplishments and how hard she worked at it. Then she thanked Sonya for reminding her that she’s more than a pretty face. Then she challenged her to a hair vs hair match at SummerSlam.

Nikki Cross was backstage and she saw Alexa Bliss. She wanted to get Alexa somewhere safe, but Alexa said she’s sticking around because she needs to get some answers from Braun.

This match did not start out well for Shorty G. He was soon beat out of the ring and then Sheamus shoved him back in.

They got back in and Shorty G tried to wrestle around with Sheamus and he got some clubbing blows on Sheamus’ skull. Then Sheamus came back with an axhandle and took Shorty G down.

Sheamus then continued beating Shorty G down with knees and punches. G got to his feet and hit a rolling kick on Sheamus and he climbed up top and hit a missile dropkick. for a two count.

Soon Sheamus returned fire with a White Noise and primed himself for the Brogue Kick which he nailed for the win.

Styles made his way to the ring and he had a man behind him. It was Joseph Parks, the former Abyss who is now a producer for the company.

Styles then introduced the new Intercontinental Statistics System. They revealed who is #1, and it was AJ Styles. Then he revealed the rest of the names and it was empty. He said no one has earned a match against him.

Then Jeff Hardy came out. Michael Cole said he didn’t understand the purpose of “that bozo” Joseph Parks being in the ring. Hardy said it could have been him in the finals against AJ Styles. Then he said that title is very special to him, and he wants it back.

Styles put Hardy over a bit, but he still didn’t want to give him the match. Then Hardy took a beating to Styles and hit a Twist Of Fate. Then he wrote his name on the board and drew a little picture of his face before leaving.

The Lucha House Party sneak up behind Shinsuke Nakamura & Cesaro backstage and steal their titles.

After the commercial, Styles wasn’t happy at all. Hardy used a permanent marker, too.

They got started and felt each other out. Then Metalik sent Shinsuke outside with a rana, and Nakamura landed a kick to stop a dive which got him a two count and slowed down the match a bit.

They continued on until Shinsuke was about to hit a Kinshasa and then the Lucha House Party’s music came out again and Kalisto came out. He was in great shape and took out Cesaro.

Metalik hit the elbow on Nakamura and got the win.

Matt Riddle did an interview with Matt Riddle backstage. He started talking about King Corbin. Then Shorty G walked up to apologize to him for trying to take him out a couple of weeks ago.

Then Corbin jumped Riddle and took him out. This was a set-up apparently.

Bliss said she got to know the man behind Strowman. They showed some clips of the two of them from Team Little Big. They asked Bliss is she cared about him romantically. She said “maybe.”

Bliss said that The Fiend is compelling and you can feel his presence. Now she knows what it’s like the be a moth to a flame.

Big E hit a shoulderblock which caused Morrison to try again. Then Johnny Drip Drip landed a kick to put Big E down.

Morrison flipped around the ring and Big E caught him to toss him down. Then John jumped on the apron and tried to jump into a springboard, but Big E knocked him onto the floor.

Big E dragged Morrison to the apron where he landed some clubbing blows to the chest and a splash. Miz distracted Big E and then Morrison hit a chop block.

Morrison continued to work on Big E’s knee. Then Otis came down to confront The Miz. The lights started to flicker again and then they went to commercial.

When we came back all the Superstars were around the ring. Then they showed Retribution backstage causing chaos. They locked someone in the bathroom and were throwing chairs all over the pace. They took out a referee and spraypainted the wall. None of the Superstars around ringside knew what was going on as the match continued.

Morrison hit a springboard kick for a two count. Jessika Carr ran out and got all the Superstars to run back and protect the PC. Miz didn’t leave. He stayed on commentary as Morrison continued to work on Big E’s knee.

The Superstars made it backstage, but it was too late. Michael Cole called it a “hit and run attack.”

The match continued and both Big E and Morrison were up top. Big E shoved Morrison down and landed a uranage slam and then Morrison got loose from another slam.

Sheamus took Big E out with a Brogue Kick before he could leave. Then Braun Strowman entered.

Braun wanted Bray Wyatt to come. Alexa Bliss came out instead and said they needed to have a conversation.

Braun said he doesn’t want to talk to Bliss. He wants The Fiend. She said she’ll slap some sense into him. Sh started slapping him saying “this isn’t you.”

Then Braun picked Alexa Bliss up and was about to Gorilla Press slam her when the lights started going out like The Fiend was on his way.

Then Braun started to throw Bliss, but the lights went out. The Fiend was standing over Bliss and Braun was gone. Strowman was on the screen instead laughing away like an evil maniac.

Then Braun and Bray both laughed together. Braun screamed, and that’s the end of the show.