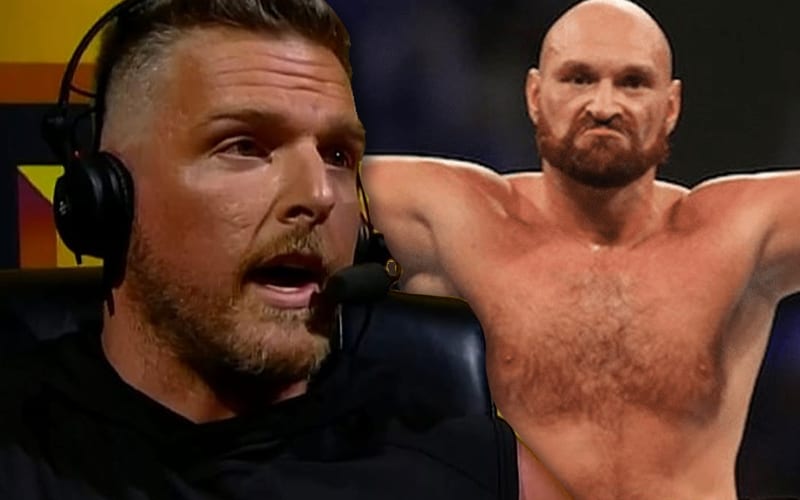 WWE brought in Michael Che and Colin Jost to take part in the Andre The Giant Memorial Battle Royal the last time the company could run such a match at the show of shows. They were not very good in the ring at all, and Pat McAfee promises to be better.

Now Pat McAfee has a match against former NXT Champion Adam Cole to look forward to. He’s been working on some things and hopes that he won’t disappoint. Along with saying he will be better than the Weekend Update hosts, McAfee also stated that Tyson Fury was also terrible in the ring.

“Listen, I got in shape for my wedding. Best shape that I’ve been in in a long time. It is nothing just to continue that to go, and I will make sure that I won’t look terrible in there like the Saturday Night Live guys did. And by the way, Tyson Fury, best boxer I’ve ever seen, he looked terrible in the [WWE] ring. There’s been a lot of outsiders, even though I’ve worked for NXT for a few years, and I’ve had a match before. Shout out WARPIG, IWA East Coast. I also kicked his head off, pinned him. It’s a common trend here. I am undefeated. I don’t know if anybody in NXT is currently undefeated throughout their entire professional wrestling career like me.”

“But I am going to look good in there. I just want to let everybody know that I am very much going in there with the mindset that I’m gonna win. I’m going to remain undefeated, and I am going to dance on the grave of the entire f*cking NXT. So, that is just how I feel. I think that is how our entire office feels. I feel that is my mindset going in because I got pushed out of there by the guy that runs the place.”