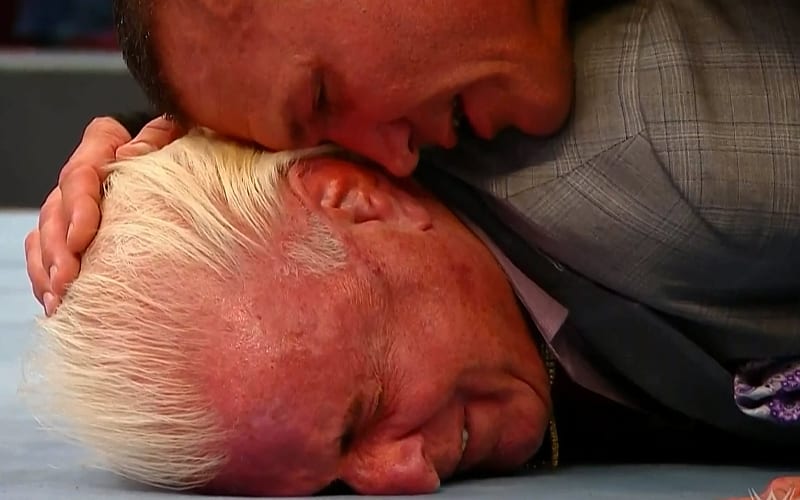 Ric Flair’s return to WWE television had some fun moments from the Performance Center. That run ended tonight on WWE Raw.

Kevin Owens took on Randy Orton this week on Raw. The match ended with an RKO on Kevin Owens and The Viper picked up the win.

Ric Flair got in the ring to celebrate with Orton. Then Randy Orton called for a microphone. Orton said he has every right to be upset with Flair, but he can’t find it in his heart to feel that way. He said the match with Owens only happened because Flair’s ego got him in the match.

Orton said he used to respect Ric Flair, but not anymore. He said Flair is a liability now. Then Randy Orton said that Flair took him under his wing years ago because he wanted Orton to be “the son that you wished you had.”

Flair started to cry, and Orton encouraged him to cry even more. He said the Ric Flair he knew wouldn’t need a pacemaker or slip into a coma. He said that Ric Flair is a junkie for the spotlight and he’s washed up. After saying that Flair was only worried about himself, Flair said that “he’s taking this very personal.”

Ric Flair said the old version of himself isn’t here anymore as he continued to praise Orton and WWE. He said that Hulk Hogan calls and asks “how is it?” Flair tells The Hulkster that it’s the “greatest feeling in the world.” Then Flair said that he hopes Orton breaks his World Title record.

Then Orton hugged Flair and then he stopped him. Randy Orton hit Flair with a low blow as the lights flickered from the impending Retribution invasion. Orton eased Flair down to the canvas in the ring and whispered something in his ear. Then Randy Orton punted Ric Flair in the head. The lights happened to be flickering so the moment where Orton punted Flair was in total darkness.

Drew McIntyre ran down and chased Orton off after the damage was already done.