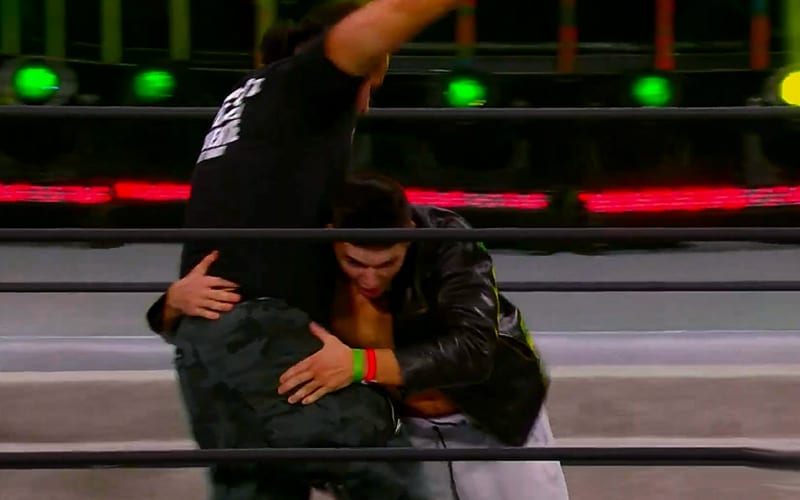 Matt Hardy was busted open the hardway during AEW Dynamite this week. Sammy Guevara accidentally hit him in the face with a chair, but the spot was planned. Guevara just threw the wrong chair.

Reby Hardy wasn’t happy with this spot at all. Many other fans spoke out about the amount of blood on television, even if it was unintentional.

During Wrestling Observer Live, Bryan Alvarez explained that there were apparently two chairs at ringside. Guevara was supposed to throw a folding chair like Sabu used to do. He couldn’t find the right one, so he grabbed the first chair he could and hurled it at Hardy.

“Apparently there were two chairs out there. One of them was your traditional folding chair and the idea was that Sammy would throw that and it would be like Sabu and Matt Hardy was supposed to be able to get his arms up. This was supposed to be a chair shot with no blood, okay?”

“Now, the problem was they’re out there in the heat of the moment and Sammy was very excited and he looked around and he couldn’t find the folding chair, so he found one of those really heavy chairs, a totally different kind of chair and he panicked and he threw it and he hit Matt Hardy and busted him open and Matt Hardy needed 13 stitches.”

It was said when Sammy Guevara walked through the curtain he was chewed out immediately. It’s not clear how many people wanted to talk with him, but Guevara got many earfuls. Sammy Guevara didn’t do it on purpose, but he simply couldn’t find the right chair to throw.

Sammy Guevara will likely be much more careful from this point on when deciding on a weapon to use.