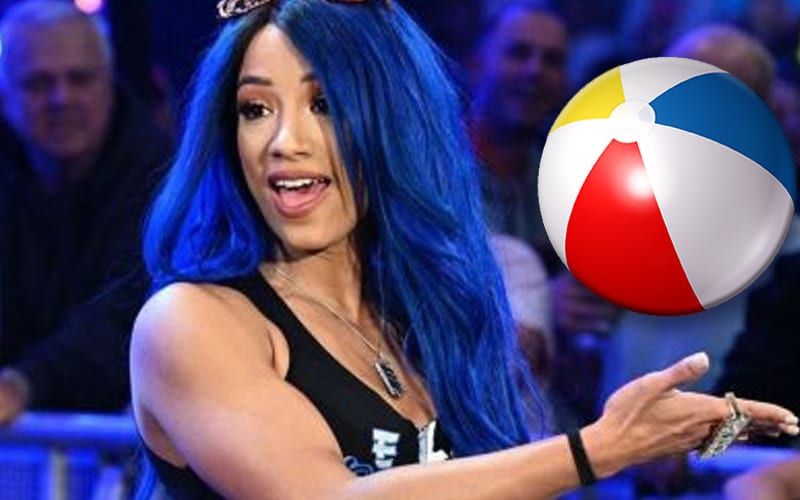 WWE fans can sometimes be a handful, especially after a big pay-per-view. Sometimes they bring beach balls and play their own games during the matches. People like Cesaro have spoken out against the practice of bringing beach balls around. Sasha Banks misses fans so much that she would even welcome a beach ball interruption.

During WWE’s Day Of, Sasha Banks took a moment to talk about live fans and how much she misses them. It’s been months since they heard the roar of the crowd. Banks misses those unexpected moments that come along with being a WWE Superstar.

“I miss — for instance if a beach ball is thrown into the crowd, then taken away from them, how are you going to get back?” Banks asked. “What are you going to do? We don’t have that anymore. Or what if they don’t like the way something is going, you can change their minds, I love that. You feed off their energy, and I really, really miss that, but I have been learning so much more since they’ve been gone, as well.

“I’m ready for them to kind of come back. Well, I’m ready for the world to get a little bit better to figure out what they want to do for it to be amazing and open for everyone’s safety. Until then, I’m gonna keep on entertaining and you’re gonna keep on watching at home. I hope you enjoy it.

“But maybe it’s during these crazy times, it’s on such a different grande scheme of things of how I look at this as a whole, since we don’t have an audience. Maybe that’s why I’m not as so, ‘Oh my God, what are they going to think?’ Because their opinion is really online, and the thing is I don’t have to read that, and I don’t read it. Really, my opinion is my opinion of what I think this match is going to be and what it means to me.”

WWE is talking to arenas about bringing back live fans. There’s always the possibility that Vince McMahon can make something work with fans in an outdoor setting for SummerSlam.

Sasha Banks is certainly excited for that day to come along with so many others.