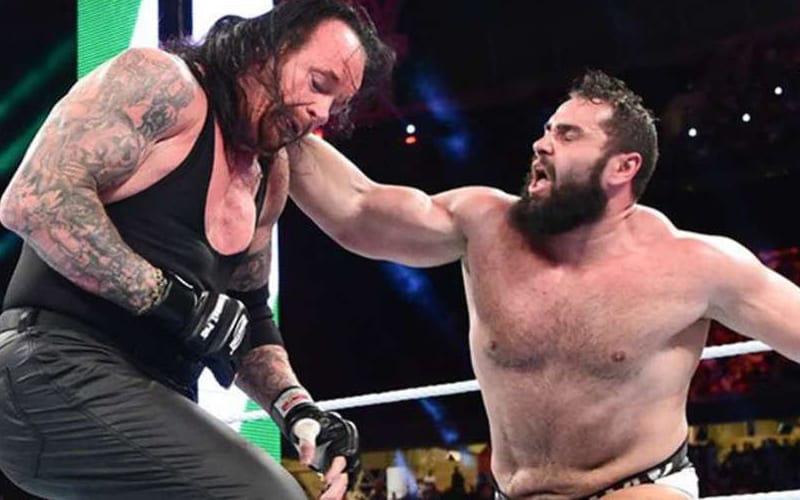 The Undertaker and Rusev met in a casket match during the Greatest Royal Rumble event in Saudi Arabia. The two had a match together overseas and communicated throughout the experience, but Rusev was always intimidated by the Phenom.

That Greatest Royal Rumble Match is interesting. Rusev was originally in the match, and then Chris Jericho was put in his spot. Following Jericho’s announcement that he would be continuing to work with NJPW, WWE put Rusev back in to face the Deadman.

While hanging out on his Twitch stream, Miro discussed working with The Undertaker. He admitted that even though Taker did nothing wrong to him, he was still intimidated by him and still is to this day.

“Taker, I’m still intimidated to this day from Taker, and he hasn’t done nothing wrong to me, like nothing wrong. He’s always been super nice. We got to work together, Jesus, and I’m still intimidated. Like sometimes when I would see him, I would go the other way because I’m still in awe of these people. I grew up watching these guys. These were my heroes. Like if I back in the day said, ‘Hey, one day I’m going to know The Undertaker and I’m going to be wrestling him,’ everybody would like stone me to death. Literally like stone to me to death. Probably some people, even if I tell him now, if I tell them I worked with The Undertaker, they probably won’t believe me. Even though we did it on TV in front of 65,000 people, they probably still won’t believe me.”

The Undertaker brought fear in the hearts of millions of fans around the world. Even Steve Austin admitted that he once forgot an entire match while being memorized by the Deadman’s smokey entrance.

Miro has a lot of great memories from WWE. Facing The Undertaker is certainly one he will never forget. You can check out a clip from Rusev’s Saudi Arabian encounter with The Undertaker below.