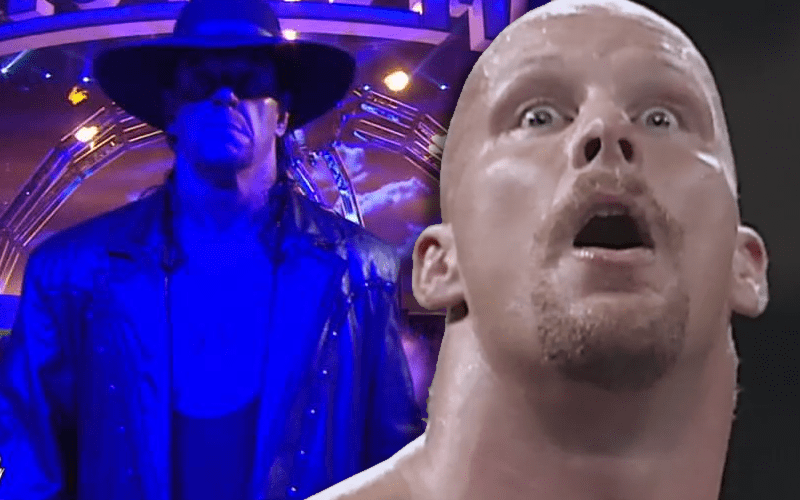 Steve Austin and The Undertaker had many battles in the ring. Some of them were featured on bigger stages, but fans all over the world got to watch them do battle at house shows back in the day.

During the Broken Skull Sessions, Steve Austin told a story that proves how The Undertaker’s entrance can be captivating even in the smallest arenas. All it took was smoke and Austin forgot what he was going to do as The Undertaker’s presence blew him away.

“We was out there on the damn road somewhere and I don’t remember where we were, but this is when they use to smoke up the entrances that was the only effect we had other than a 20×20 ring and hell, I was working with the Undertaker.”

“I was just kinda catching my groove a little bit and they smoked up the arena and there I was in the ring and here he comes. Nothing near the proportions of what you’ve got here [at WrestleMania].”

“This guy as he’s coming to the ring I’m thinking, you know because we call it all in the ring, we’ve got a finish, but it was all in the ring. So I’m thinking that I’m gonna do this and that and I’m working this and all of a sudden they smoke it up and here he comes and my mind went blank. I’m watching that big son of a gun walking to the ring and I’m now thinking, ‘Man what was I gonna do?'”

“He comes to the ring and he does the lights and we just started going, but I didn’t know what I was doing because I was so blown away by his presence.”

The Phenom and The Rattlesnake probably pulled off a great match to send the crowd home happy that night. It didn’t change the fact that everything Austin had planned for their match escaped his brain when he witnessed The Dead Man’s iconic entrance first-hand.