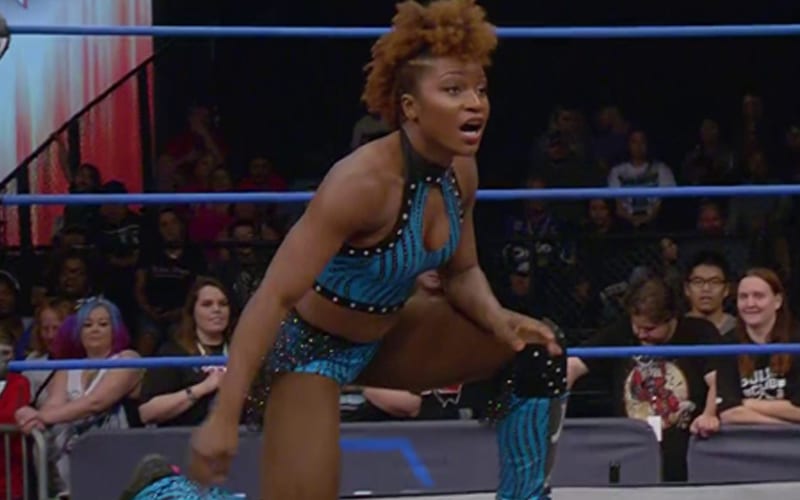 WWE released MJ Jenkins from NXT on April 15th. Fans were happy to see Jenkins appear on Dynamite during Fight For The Fallen. Jenkins also has a lot to say about inequality in the pro wrestling scene.

Jenkins got on Twitter where she released several tweets in quick order. Her first tweet was seemingly directed at Booker T’s comments about Naomi.

“When you see Black people put down Black talent & work ethic. You’ll find that person always having a job. They’re apart of the system that wants to keep us “humble” for scraps & telling us to “work harder” as if we haven’t been breaking our backs only to receive scraps.”

The former NXT Superstar also stated that there is no need to go into “massa mode” when a company is accused of inequality. She used an animated gif of Samuel L Jackson crying over a deceased Leonardo DiCaprio from Django Unchained to illustrate her third tweet.

“This crabs in a barrel mentality has got to stop. We should not be an enemy of our own.”

“I’d love to see Black men support Black women in Pro Wrestling & not only limited to the Black women you find f*ck worthy.”

“You don’t have to go into protect “massa” mode every time inequality is being called out.”

The next morning MJ Jenkins had even more to say on the subject of inequality in pro wrestling. She called out companies for having a “black quota” and not presenting them properly as well.

• Receiving achievements not limited to social convienece or “The Black Quota”

• Recognized as the greatest

MJ Jenkins received some support for these tweets. She was certainly critical of the pro wrestling business as she called attention to changes that are needed to further establish an environment of equality.

What do you think about what MJ Jenkins had to say? Sound of in the comments below!