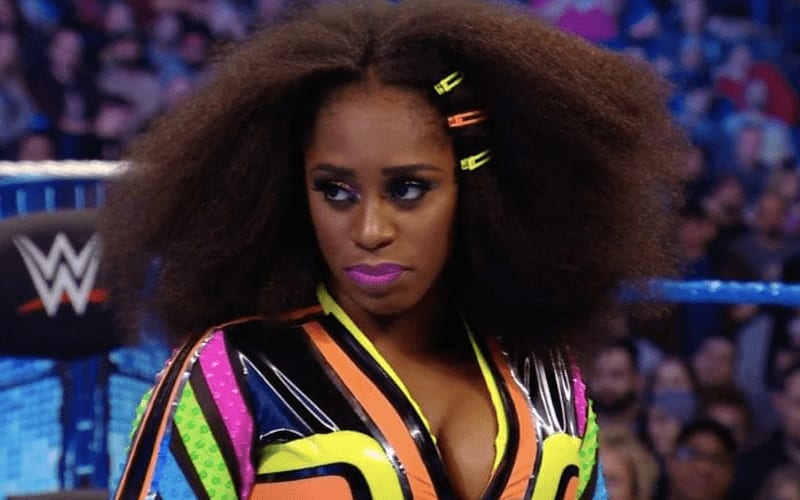 Naomi lost a match on Friday Night SmackDown last week and #NoamiDeservesBetter sprung up all over social media. Booker T has had enough of the hashtag movements.

Booker T opened up about Naomi’s situation. He felt bad saying this about Naomi, because he likes her. He still doesn’t feel like anybody deserves better until it is earned.

During his Hall Of Fame radio show, Booker T explained how you must earn a spot on your own merit. Life isn’t fair and “sometimes you have to make your own breaks.” This is a mantra Booker T lives by as he had to fight for his own success.

“They can go to hell with all these hashtags as far as I’m concerned. Nobody deserves a chance, alright. First and foremost, you have to earn your chance and your spot on the roster. This is not some movement to just pull somebody up just because. I hate to sit here and say this and talk this way because I like Naomi. But, as far as the business goes, you get it on your merit alone. That’s it. It’s no buddy system. I know somebody is going to hear me and say, well such and such and that’ why they are doing it. Yes, that may be true. But life is not fair. Sometimes you have to make your own breaks. Sometimes you have to go out there and rise to the occasion when no one else thought you could. It may not happen overnight. No one expected me, including myself, to become six-time world champion.”

“But, my persistence as far as going out to the middle of that ring and performing better than all those suckas in the locker room and the suckas in the locker room knew it. The fans saw something different and the signs were there for Booker T on a nightly basis. That’s why I say the hashtag Naomi deserves a chance or deserves better, I don’t think that serves her any purpose. People advocating for her in that way, the way that needs to be put out there from an advocating perspective is her advocating for herself when she goes out to the ring and performs at a high level and the world sees it”.

“When you do that Naomi, you can’t be denied. No one will ever say someone gave you anything. If it happens right now, tomorrow, someone bless Naomi with the world championship, trust me, would not feel like she did it on her own. It would have to be a movement for something like that to happen. I never would want the world title if it was given to me that way. Naomi, I’ve said it a thousand times, is probably more athletic than any female in that locker room and 99% of the females in this business. But, psychology and working are two different things. I hope and I wish that I had my hands on her for one month. Naomi would look at this business in a totally different way.”

We’ll have to see if WWE decides to book Naomi in a more prominent role. Vince McMahon will continue booking things as he pleases to continue in his own desired direction. There is also a possibility that Naomi might get a push because WWE needs veteran performers, and they are running a little low in that department.

Do you believe that Naomi deserves better like so many others have spoken out about on social media? Sound off in the comments below!!