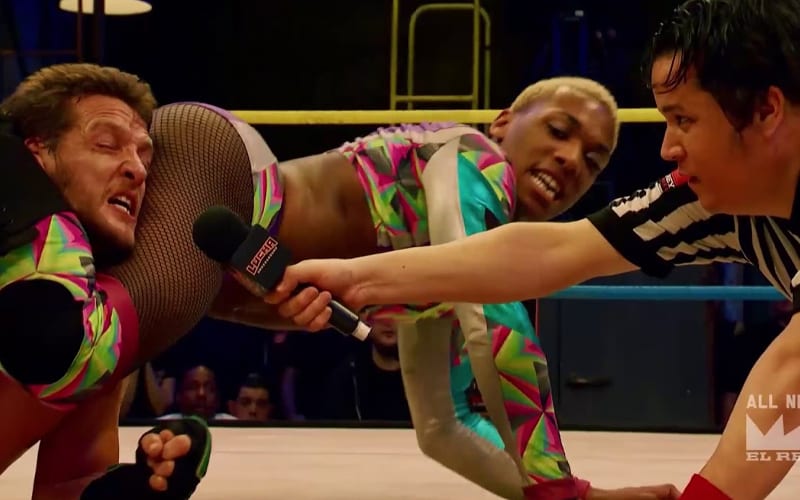 Lucha Underground is done, but they had a respectable run all things considered. The show focused on lucha libre and introduced a lot of fans to names they see on much larger stages today.

Sonny Kiss wrestled for the company as XO Lishus, but he doesn’t have the best memories of his contract. He did get to share his abilities with a much wider audience. He was struggling in his personal fiances at the same time.

While speaking to Talk Is Jericho, Kiss called Lucha Underground “a nightmare.” They were only making $4,000 a year under those contracts. He found himself not being able to contribute to his rent or even pay his phone bill at times.

“It was a nightmare. We were probably maybe making four grand a year. We couldn’t sign anywhere else at all. There were times I couldn’t pay my cellphone bill. I couldn’t contribute to my rent. It was bad.”

Lucha Underground also kept certain stars “hostage” while under contract. The show was over, and not coming back, but they wouldn’t allow stars to sign elsewhere. Wrestlers like Ivelisse had to seek legal representation to get out their deals.

He spoke about the Lucha Bros and how they were able to get out of those contracts. Others had to try much harder.

“They were amongst the first to get out though. I was amongst the last. Cody was like, ‘don’t worry. We’re still gonna book you to the moon. We’ll make sure you’re still here’ which was great. I really appreciate him for that. January was when they announced AEW. I didn’t get the contract until TV happened.”

Lucha Underground was viewed by El Rey Network as a television show and not a pro wrestling sports entertainment program. That is why they were so litigious about spoilers. Sonny Kiss was just making a name for himself in the pro wrestling world, but he could have used a much higher paycheck.