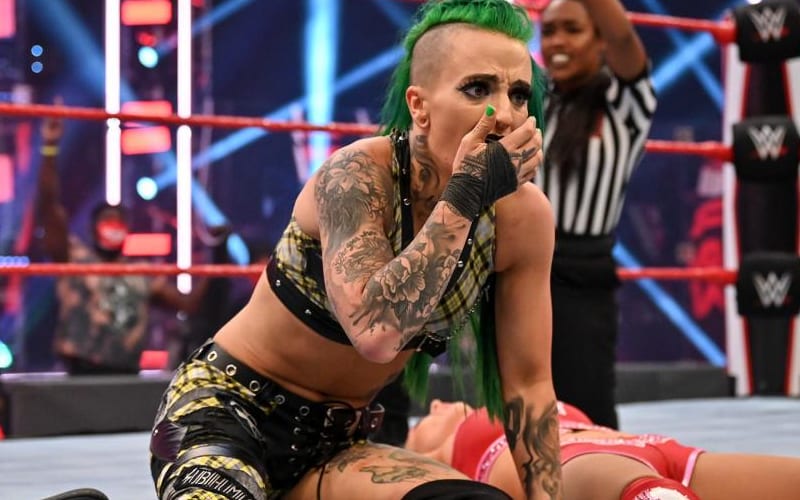 Ruby Riott was the leader of the Riott Squad, but since the stable’s disbandment WWE hasn’t had much for her. A long absence due to injury also got in the way. This week’s episode of WWE RAW included a moment that she won’t soon forget.

Ruby Riott opened up about how special it was to defeat Peyton Royce this week on RAW. It marked her first singles win since November of last year. Since coming back from her double shoulder surgery Riott hasn’t been able to secure a win and her losing streak was also a topic of discussion within the Internet Wrestling Community.

Monday night was a special night. My match against Peyton Royce might not have been for a title, or even an opportunity at one. But, it was my first singles win since November of 2019. When I came back from my shoulder surgeries, I thought things would be exactly how I left them, but they weren’t.

Things changed…people changed and I didn’t know how to handle it, but the fire that was lit after Peyton disrespected Liv Morgan, was one that I needed to shake the guilt and the defeat that I’ve felt for months. Even if it was only for a few minutes. Liv, if you watched on Monday, I hope you were proud. And Peyton, from now on, keep her name outta your mouth.

We’ll have to see if Ruby Riott will be able to keep up her winning ways, or if this is a case of WWE’s 50/50 booking. Liv Morgan’s absence opened the door for Bianca Belair to come in and show the WWE Universe what the EST Of WWE is capable of.

Ruby Riott didn’t appear to need Belair this week as backup. She defeated Peyton Royce in a straight-up singles match as Billie Kay was also not on this week’s show.