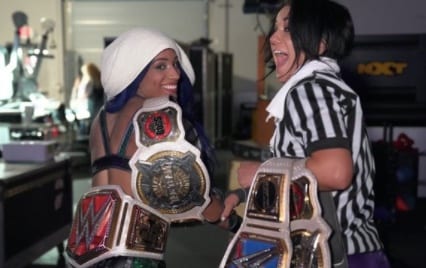 While logic dictates that Asuka still holds the RAW Women’s Championship, in a literal sense, the current holder of the belt is Sasha Banks after she ran away with the title alongside her best friend Bayley last two.

The two conspired to try and ‘steal’ the belt away from the Empress of Tomorrow, with Bayley acting as a makeshift ref in order to give Banks the win and the belt.

Now, Banks has claimed that an explanation from the pair will come tonight on Monday Night RAW.

A rematch between the two is probably imminent, and given the quality of their match at Extreme Rules, you won’t find too many fans complaining about that.

The issue lies in whether or not they’re going to wind up making this story feel too convoluted, because if they do, it could take the focus away from the great work these two are doing.