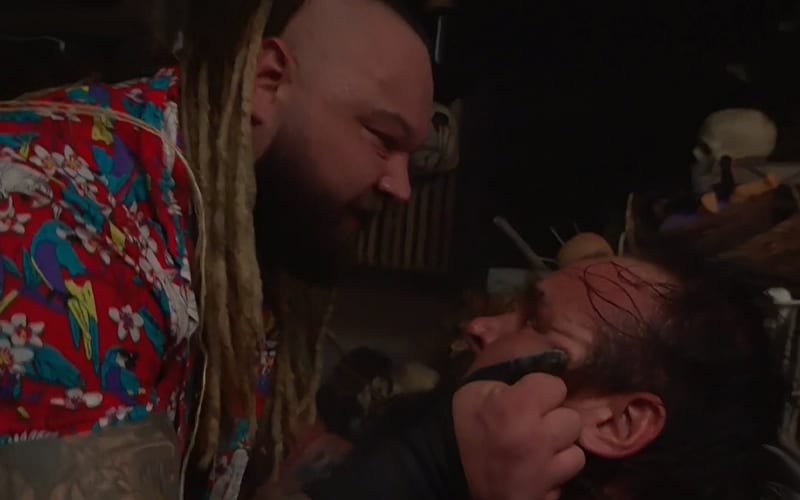 The Swamp Fight closed out WWE’s Horror Show at Extreme Rules. There were plenty of hidden messages and call-backs throughout the cinematic match. The story still wasn’t finished when the match was over.

Braun Strowman and Bray Wyatt met in a swamp where they battled through a series of twisted scenes. Highlights included Wyatt’s rocking chair showing up and getting smashed, a second Braun Strowman appearing only to attack the original article, and Alexa Bliss revealing herself to be Braun Strowman’s secret dark fantasy.

Wyatt jumped Strowman when he was distracted by Bliss. Then Braun sent Bray plummeting into a boat on the ground. When Braun looked again, Bray was gone and then they brawled into a lake.

Braun climbed out of the lake and Bray was nowhere to be seen. Suddenly, laughing children flashed on the screen as Wyatt destroyed an ore over Strowman. Other disturbing images continued to flash as Wyatt carried on with his assault.

He thought that Braun was down, but the Monster Among Men got up again. Strowman then kicked Bray into the water again. “It’s over” Braun said before Bray Wyatt grabbed him and pulled them both down into the swamp.

The Horror Show at Extreme Rules ended by panning the swamp with the camera. Suddenly, the Fiend rose out of the swamp and his laughter was heard. Braun Strowman was nowhere to be seen.