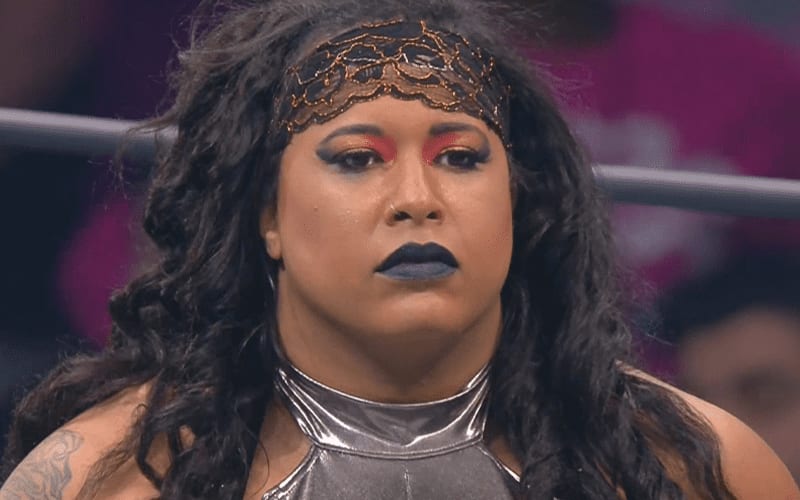 Nyla Rose is making a much bigger name for herself now. There was a time when nobody knew who she was unless they thought she was the wrong person.

While speaking to AEW Unrestricted, Nyla Rose revealed how she became a ring crew member for Impact Wrestling. After the show was over, one fan mistook Rose for Tamina Snuka. She signed the autograph, but then she soon had an entire line full of fans waiting to meet her.

Nyla Rose signed the autographs, but she also had to come clean in the process.

“I happened to know someone who had their foot in the door who was on the ring crew for Impact, Foxxy Roxy. She was gracious enough to say, hey, there’s an opportunity. It’s just ring crew. I can’t promise anything beyond that. I said, yea, let’s do it. She brought me on and gave my name to the right people. I don’t know who made the decision to give the thumbs up, but they did. I worked with the ring crew on a couple of shows. We were standing there, wearing all black as the ring crew does. They had a meet and greet before the show. You have so many wrestlers all around the ring signing autographs. This one kid came up to me and said, can I have your autograph. I’m like, why? The more he talked, I realized he thought I was Tamina Snuka. I looked over and they were like, if they want your autograph, sign your autograph. I said ok, cool. I just didn’t want to get in any hot water. I signed the autograph. That was a mistake because somebody saw me sign the autograph and so I started to get a line of people. At the time, I’m nobody and I’m thinking, I don’t know what I’m doing. I’m not who you think I am. I signed Nyla Rose. They were just so excited wrestlers were out there and they thought I was somebody.”

Nyla Rose has people lining up to meet her now and they know who she is. It’s interesting how time can change things. It might be interesting to see what she would say if a fan asked her to sign an autograph as Tamina Snuka today.

Rose is currently teasing a big reveal of a new manager in AEW. She very well could bring in Vickie Guerrero to fill that role, but you also never know who might show up to assist The Native Beast.