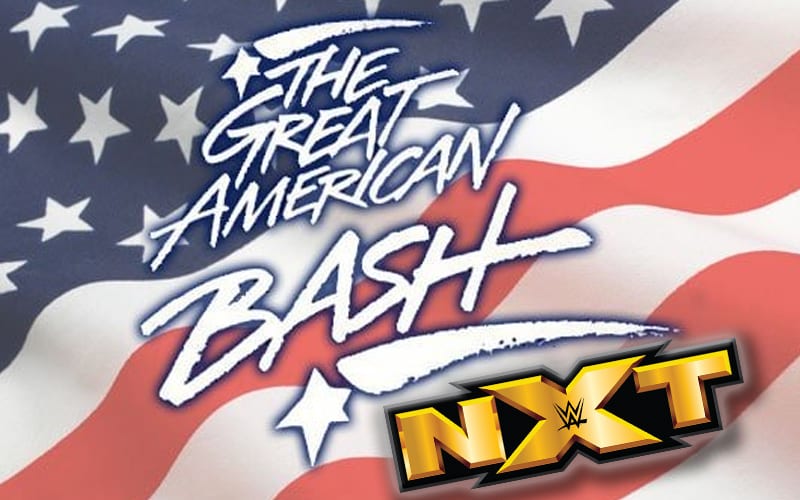 As reported earlier, WWE is bringing back The Great American Bash for next week’s episode of NXT. The show will feature a Strap Match between Dexter Lumis & Roderick Strong, a Fatal 4-Way match to decide the number one contender for the NXT Women’s Championship, and more.

However, WWE has now announced through an article on its official site that the event will happen over the course of two weeks. This means that the show will go head-to-head with AEW’s Fyter Fest on both weeks.

The match between Adam Cole & Keith Lee to crown the first ever Double Champion in NXT history will take place on the second night of the Great American Bash on July 8th.

The Great American Bash is coming to NXT, taking place over the next two weeks on USA Network.

The proud sports-entertainment tradition is back, this time under the black-and-gold banner. Dating back to 1985, the event was rekindled in the aughts and now returns once more with NXT’s top Superstars looking to leave their mark on its storied history.

As part of the event on July 8, NXT Champion Adam Cole will take on North American Champion Keith Lee in a Winner Take All Match.

Three matchups are already set for next week as well, including NXT’s first-ever Strap Match taking place between Dexter Lumis and Roderick Strong. Additionally, Mia Yim, Tegan Nox, Candice LeRae and Dakota Kai will collide in a Fatal 4-Way Match to determine the No. 1 Contender to NXT Women’s Champion Io Shirai, while Rhea Ripley will face Aliyah & Robert Stone in a Handicap Match where The Nightmare has agreed to join The Robert Stone Brand if she loses.

For two weeks straight, NXT & AEW will butt heads with two loaded shows. It will be interesting to see who wins the ratings war on both weeks.

Who do you think will win the Wednesday Nights rating war for the next two weeks? Tell us your pick in the comments below!